On March 9, standing before 32 students in the Roosevelt High School Library, author Cristina Henríquez encouraged the teens to fill empty seats in the first few rows. “I took a shower today,” Henríquez promised, to scattered laughter.

Henríquez’s visit to Roosevelt followed her March 8 appearance at the Arlene Schnitzer Concert Hall, where she spoke as the featured author for Multnomah County Library’s community reading project, Everybody Reads. Each year, MCL chooses one book for Everybody Reads and arranges events surrounding the book to promote discussion and foster understanding. The project is made possible in part by The Library Foundation.

The Everybody Reads 2016 selection is Henríquez’s most recent novel, The Book of Unknown Americans. Through a partnership with MCL, Literary Arts facilitates Everybody Reads author visits to schools and a culminating lecture at the Arlene Schnitzer Concert Hall. In addition to bringing Henríquez to Roosevelt, Literary Arts brought her to Centennial High School and facilitated tickets and transportation for 525 public high school students from throughout Multnomah County to attend her presentation at the Schnitz.

At Roosevelt, Henríquez asked the students if anyone attended the previous night’s event. A few hands went up. “Well, today I won’t be talking as much,” Henríquez said. With that, the rest of the hour was left to student questions.

The first came from a girl in the front row: “Would you ever consider making a movie out of your book?”

“Who would be Maribel?” Henríquez asked, referencing the teen female protagonist who represents half of the novel’s central love story. Silence fell in the library. “Maybe, like yourself?” she prompted, indicating the question’s asker. Students laughed.

“It’s interesting, though,” Henríquez continued, “how hard it is to even think who would be cast for this role. It took me a long time to realize there were books with people who even look like me. It’s amazing that you’re all in high school, and your librarians gave you a book like mine to read.”

When a student asked about Henríquez’s inspiration for the novel, the author explained that portrayal of immigrants in the U.S. was “overwhelmingly negative,” and she wanted to change that.

“I knew this firsthand, living with my dad,” Henríquez said. “His story wasn’t represented anywhere at all.”

The characters in her novel, while all Latino, vary widely in life situation. Some were born in the U.S., others in Mexico or Panama; some speak fluent English and halting Spanish, and some vice versa. Henríquez said all the nuances of character were intentional, to accurately represent the diversity of experience within an oft-stereotyped demographic.

“I felt like if I could tell as many of those stories as I could fit in one book,” Henríquez explained, “that it would have pushed back against the dominant narrative.”

Roosevelt is one of the most ethnically diverse high schools in the state of Oregon, and 31 percent of its student body identifies as Latino. A different front-row student asked Henríquez how it felt to be a Latina author published in magazines like The New Yorker and The Atlantic.

While her heritage is clearly an integral part of her life and work, Henríquez responded by saying that she doesn’t think of herself as a Latina writer, or a woman writer, but simply a writer.

“It is important to have a diversity of voices,” Henríquez said. “But I think as individuals, we don’t want to be constricted by categorization. We want to be thought of as broad of a person as we can be.”

Thanks to Roosevelt librarian Betsy Tighe and all the staff who helped facilitate this visit, and to the students for engaging with the book and asking great questions! 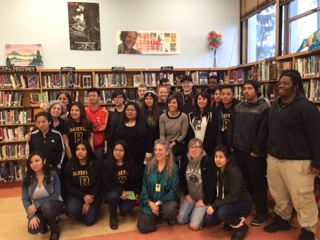 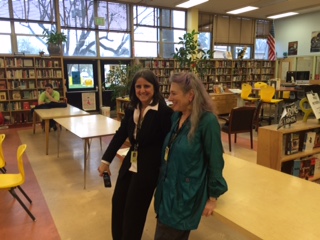