Before his lecture at the Arlene Schnitzer Concert Hall, award-winning author Viet Thanh Nguyen spent an afternoon with over 100 students at Reynolds High School. Two students gave a polished introduction to Nguyen, one of whom mentioned that her father was also a refugee from Vietnam.

Nguyen began by asking how many other students had parents who were born elsewhere, and about half the students raised their hands. When he asked how many students themselves were born in other countries, it was only a handful. “I came here when I was four years old as a refugee,” said Nguyen. “What do you think is the difference between an immigrant and a refugee?”

Students were shy initially, but Nguyen drew them out. “Immigrants are looking for opportunities,” said one student. “They’re going to a new place to find more opportunities, for work and freedom and stuff.”

“Refugees are leaving because it’s unsafe,” said another student.

Nguyen nodded. “Okay, so the difference is that immigrants come from with a stable lifestyle, and refugees are seeking help. So, what do you think of when you think of refugees?” Many students spoke at once. “Boats?” he said. “I’m hearing boats. And camps? So when you hear refugee, you think of camps and boats.” The students giggled nervously. “My father came here on an airplane, so he was fresh off the plane.” Everyone laughed. Nguyen smiled. “I ask you to see what comes to mind because I’m a refugee, and you might be thinking, ‘He doesn’t look like a refugee’ because you see something different online; you see boats, and starvation, and camps.”

Nguyen noted that it was important to him to identify as a refugee and told the story of how he came to the United States. “My parents were on the losing side in a war, which is a huge incentive to leave.” He mentioned that his earliest memories were of being separated from his family as a four-year-old, since each family member had to have a “sponsor” in the US. “My son is four years old, and I can’t imagine losing him for a few months.” 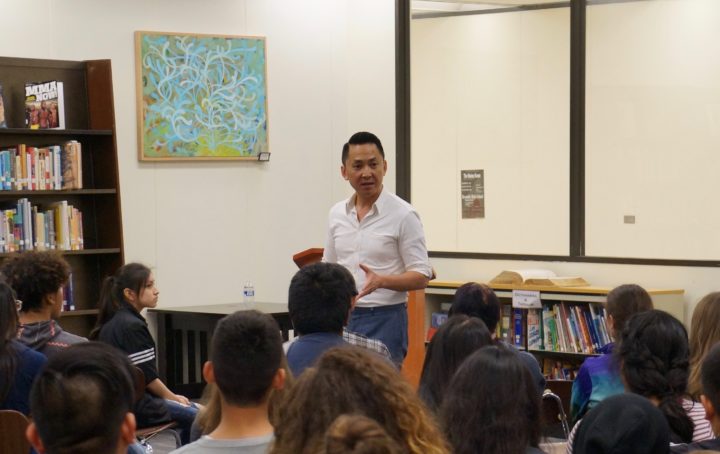 “Another question,” he said with a grin. “What is the distinction between an undocumented immigrant and a refugee?” Students were more stumped by this one, and everyone finally agreed that refugees are people who don’t have a choice. “There is a legal definition of refugee, and it implies that we owe them something as a human being,” Nguyen continued. “In 1975 it was in the interest of the U.S. to bring Vietnamese refugees here to prove that Communism was bad and the U.S. was good.” He explained that the term refugee is a loaded term, and that we don’t always want to classify folks as refugees because it implies “we owe them something.” But the term immigrants has its own implications: “People think about heartwarming stories of seeking the American Dream.”

He told about going to another high school where the teacher had mentioned that several students in the class were refugees. But when he arrived and asked for a show of hands, no one would raise one. “I get it,” he said. “High school is awkward enough without being that refugee kid.” But this was precisely why Nguyen felt it was important to assert himself as a refugee–he wants to show that “we can be writers, too.”

Nguyen began asking students about their own writing, and talked a few into sharing their work in front of the students. One young man read a poem about wearing a mask to hide his true feelings. “I think that’s universal,” said Nguyen after the applause had died down. “I grew up feeling like I was an American at home, spying on my Vietnamese family, and outside I felt Vietnamese spying on my American friends.” He praised the student’s bravery. “I can guarantee most people in this room feel the same.”

“It’s interesting that you didn’t identify as a writer at first,” Nguyen continued. “Because you are a writer! Writing is anything you put down, whether on paper pen, computer, or even graffiti.” He mentioned the Instagram poet Rupi Kaur, and that she was selling more books “than probably anyone on that shelf,” he said, gesturing toward the stacks. “Perhaps you associate writers with dead people who wrote books,” he continued. “But writing is changing. You don’t need anyone telling you what is permissible to write.”

Another two students were brave and shared a dramatic scene of a father and son in a hospital, and a flashback to the father talking to his deceased wife. The piece garnered enthusiastic applause again from their peers.

“I’m assuming that was not autobiographical, right?” Nguyen asked. “Was that based on other people you know?”

The student explained that he had taken parts of himself and infused them in each character. Nguyen nodded. “That’s what writers do.” He explained that a very important piece of writing was also applicable to life, “and that is empathy. What do you think of when I say empathy?”

“Putting yourself in someone else’s shoes,” offered one student.

“Right,” Nguyen agreed. “And it’s different than pity.” He explained that pity was too far away from the other person, whereas empathy “is about getting closer. It’s a good human skill.”

Nguyen told the story of seeing a sign as a kid in San Jose that said “Another American driven out of business by the Vietnamese.” The sign referred to the Vietnamese grocery store that his father had opened. “Those nine words are an age-old story,” Nguyen said. “Here is how it works: American is the hero. Driven out of business is the drama, which every good story needs. Vietnamese is the villain. The sign is asking you to empathize with the American. It appeals to fear and, in a weird way, empathy. The story is saying that Americans–which did not include me–can empathize with each other, but not with the villain.” The students were silent, enrapt.

“This is why I became a writer,” Nguyen continued. “I knew that if I didn’t tell my story, then this other story would go uncontested. Storytelling is crucial.” He motioned toward the student who had introduced him, whose father was a refugee from Vietnam. “We are changing the story for the next generation.”

We want to thank Viet Thanh Nguyen for being such an engaging speaker, and the students for listening, participating, and sharing their own work. We also want to thank the teachers at Reynolds High School, particularly Teresa Brandt, for their help setting up the author visit. Reynolds also brought students to Nguyen’s lecture that night through our Students to the Schnitz program, along with over a hundred other students from four high schools. We’re definitely looking forward to next year’s author events with local high schools! 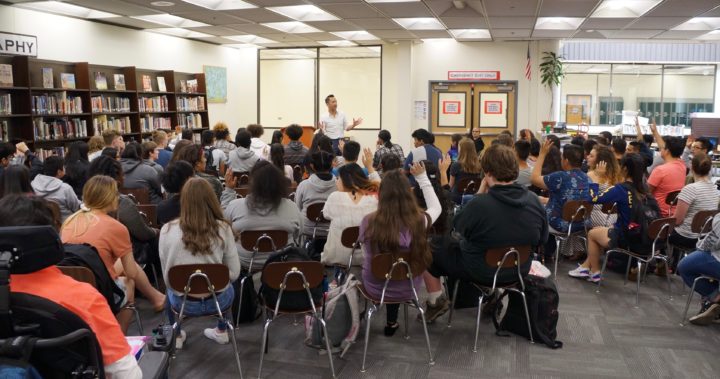 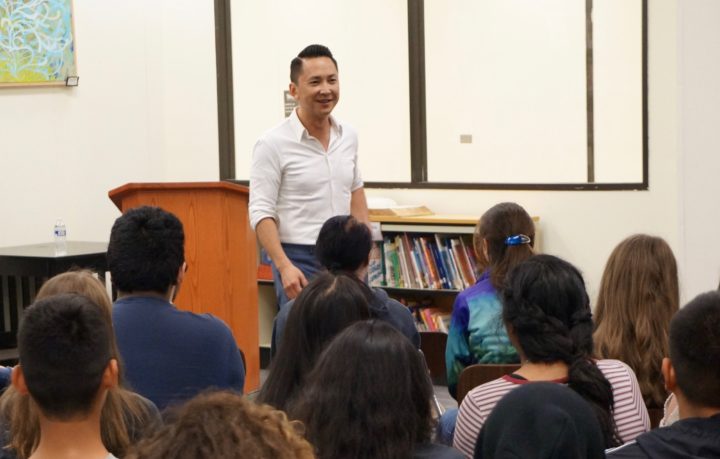