Our 34th season of Portland Arts & Lectures launches on Thursday, October 11  with Jill Lepore, award-winning historian and staff writer at The New Yorker. She is the author of the New York Times best seller The Secret History of Wonder Woman and National Book Award finalist Book of Ages. Her latest book, These Truths: A History of the United States, was recently published on September 18. These Truths is an ambitious one-volume American history in decades, offering an in-depth account of the origins and rise of a divided nation. 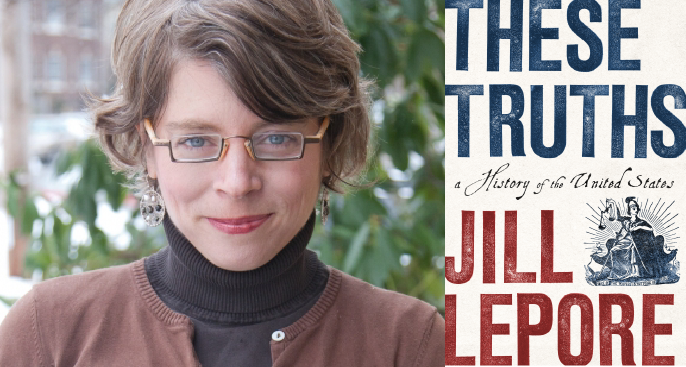 “It’s striking to me as an obsessive reader of newspapers and watcher of news how impoverished our historical perspective is on most contemporary problems.”

Jill Lepore was born and raised in West Bolyston, a small town near Worcester, Massachusetts. Her father was a high school principal and her mother was an art teacher. She wanted to be a writer from the age of six, remembering “When I was a little kid, all I did was write stories, and hide them.” She was, in her words, a “total jock” in high school and “not an especially excellent student” in public, and a “nonstop reader and manic writer” in private. She says, “I hadn’t remembered it that way, but I guess that’s what high school is like—floating in the uncomfortable space between the public you and the private you—and why it stinks.”

She went to Tufts University on an ROTC scholarship and declared a math major. Then she received a letter that her high school English teacher had assigned her to write to her future self; the letter’s contents inspired her to quit the ROTC, quit sports, and change her major to English. She says, “This didn’t make me ‘become a historian.’ But later, when I thought about what I did want to do, I remembered that letter, that time capsule, and I wondered what it would be like to read old letters all day, other people’s letters, to listen to the past, and I knew I wanted to do that.”

Quitting ROTC meant she lost her scholarship, and she started working as a secretary at Harvard University to pay for school. She had another jolt awake after receiving a prize for “best secretary,” and applied for a graduate degree in American Studies, a program that she could use her English degree to get into. While working at Harvard, she remembers, “I took a lot of books out of the library, and sat in on a lot of classes, in this history department and in the Harvard Extension School. I’m quite sure no one here knows I was ever in those classes; I was just some secretary, auditing a course. I very much doubt that I ever spoke in class. But, by then, I had become entirely fascinated by the past.”

In 2005 she began contributing to the New Yorker, writing about American history, law, literature, and politics, covering topics as wide-ranging as electoral politics, grief, torture, the archiving of the Internet, Barbie vs. Bratz dolls, and many, many more. She says, “Among the many things I cherish about the chance to write for the New Yorker is feeling like I can offer some historical perspective on a contemporary problem. It’s striking to me as an obsessive reader of newspapers and watcher of news how impoverished our historical perspective is on most contemporary problems.” 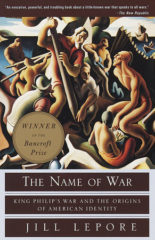 Her first book, The Name of War: King Philip’s War and the Origins of American Identity (1998), was awarded the Bancroft Prize, the Ralph Waldo Emerson Award, and the Berkshire Prize. She describes it as: “King Philip’s War is the gory, scary sequel to the first Thanksgiving. And it’s an early instance of what comes to be called the frontier experience—though it’s very unfashionable to call it the frontier anymore. The war starts because the English and the Indians have become almost too close. […] I was attempting to document a more triangulated process by which the English positioned themselves against the English and against the Indians, and actually also against the Spanish, who they saw as crueler versions of themselves. The English believed themselves to be merciful, more merciful than anyone else—until that war. I wanted to make that sense of self more contingent while holding on to what was, at the time, and since, another unfashionable notion: that there is such a thing as an American identity.” 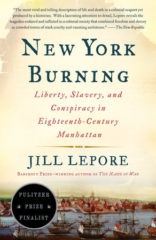 Encounters in the New World: A History in Documents followed in 2000, and A is for American: Letters and Other Characters in the Newly United States in 2002. In 2005, she published New York Burning: Liberty, Slavery, and Conspiracy in Eighteenth-century Manhattan, a finalist for the Pulitzer Prize and winner of the Anisfield-Wolf Award for best nonfiction book on race. The book examines an incident in New York City in 1741 in which thirteen black men were burned at the stake and seventeen more were hanged, a horrific incident which has been erased from the collective memory. Lepore connects this to the present, saying “I’m trying to convince people that it matters that black men were burned at the stake in New York City in 1741, and people are surprised that black people are marooned on the roofs of New Orleans in 2005? Here I am, trying to make an argument about eighteenth-century politics, […] trying to argue that the constant, ever-present threat of black conspiracy made white political pluralism possible. Because compared to that, having a two-party system was a piece of cake.” 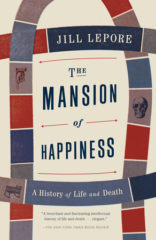 Three books based on New Yorker essays followed: The Whites of Their Eyes: The Tea Party’s Revolution and the Battle Over American History (2010), a New York Times Book Review Editors’ Choice; The Mansion of Happiness: A History of Life and Death (2012), a finalist for the Carnegie Medal for Excellence in Nonfiction; and The Story of America: Essays on Origins (2012), which was shortlisted for the PEN/Diamonstein-Spielvogel Award for the Art of the Essay. 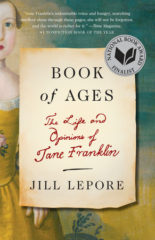 In 2013, Lepore published Book of Ages: The Life and Opinions of Jane Franklin, which was a National Book Award for Nonfiction finalist, a Time magazine best nonfiction book of the year, New York Times Notable Book, and winner of the Mark Lynton History Prize. Book of Ages brings to life Jane Franklin, sister of Benjamin Franklin. The Washington Post joined the chorus of critical acclaim, writing that Jane’s “importance, as Lepore’s portrait memorably shows, lies in her ordinariness—herlearning thwarted by circumstance, her intelligence shaped by her uniquely female experience. We may know about Jane Franklin only because of her famous brother, but he is not why she matters.” At NPR, Maureen Corrigan noted the book is “an example of how a gifted scholar and writer can lift the obscure out of silence.” 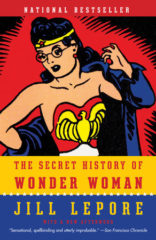 In 2014 she published the national bestseller The Secret History of Wonder Woman, which was awarded the 2015 American History Book Prize. In the Wall Street Journal, critic Carol Tavris praised the book, writing that Lepore “places Wonder Woman squarely in the story of women’s rights in America—a cycle of rights won, lost and endlessly fought for again. Like many illuminating histories, this one shows how issues we debate today were under contention just as vigorously decades ago, including birth control, sex education, the ways in which women can combine work and family, and the effects of ‘violent entertainment’ on children.” Also based in her work for the New Yorker, Joe Gould’s Teeth was published to wide acclaim in 2016.

This fall Lepore published These Truths: A History of the United States, an epic look at the idea of truth in the history of the country. A nation born in contradiction will fight forever over the meaning of its history,” Lepore writes, but engaging in that struggle by studying the past is part of the work of citizenship. “The past is an inheritance, a gift and a burden,” These Truths observes. “It can’t be shirked. There’s nothing for it but to get to know it.” Robert Dallek, author of Franklin D. Roosevelt, said: “In this time of disillusionment with American politics, Jill Lepore’s beautifully written book should be essential reading for everyone who cares about the country’s future. Her history of the United States reminds us of the dilemmas that have plagued the country and the institutional strengths that have allowed us to survive as a republic for over two centuries. At a minimum, her book should be required reading for every federal officeholder.”

Her essays and reviews have also appeared in the New York Times, the Times Literary Supplement, the Journal of American History, Foreign Affairs, the Yale Law Journal, American Scholar, and the American Quarterly. They have been translated into German, Spanish, Italian, Portuguese, Latvian, Swedish, French, Chinese, and Japanese, and have also been widely anthologized, including in collections of the best legal writing and the best technology writing. She is a past president of the Society of American Historians and a former Commissioner of the Smithsonian’s National Portrait Gallery. She has been a consultant and contributor to a number of documentary and public history projects, has an avid interest in the history of radio, television and film, and has served as documentary film juror for the NEH and at the Sundance Film Festival. Her three-part story, “The Search for Big Brown,” was broadcast on The New Yorker Radio Hour in 2015. Among her interviews, she has appeared on Fresh Air and on the Colbert Report.

Jill Lepore is the David Woods Kemper ’41 Professor of American History at Harvard University. She lives in Cambridge, Massachusetts with her husband and three sons.