We are hosting award-winning author Tayari Jones on January 17 the third event of our SOLD OUT 2018/2019 season of Portland Arts & Lectures. Tune in to OPB Radio’s Think Out Loud at 12:00 p.m. on January 17 to hear Geoff Norcross interview Jones live from our community space in downtown Portland. During her time in Oregon, Jones will visit with students at Parkrose High School and local writers at our community space. 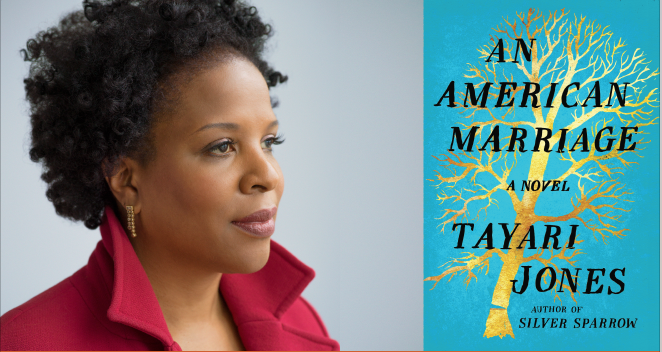 Tayari Jones was born and raised in Atlanta, Georgia, where she spent most of her childhood, with the exception of the one year she and her family spent in Nigeria. Born in 1970 to parents who are both PhDs in the social sciences and veterans of the civil rights movement, Jones self-describes her household as “single-mindedly focused on the issue of racial justice.” From birth, Jones’s home life fostered her belief in, and determination to fight for, social justice. She has said, “I have always understood myself as having an obligation to stand on the side of the silenced, the oppressed, and the mistreated.”

In ninth grade, Jones enrolled in a high school that specialized in math and science, although she has said of herself that she “was not good at math and had no interest in science.” A year before graduation, her English teacher recognized her gift for writing and encouraged her to enter a city-wide creative writing contest, which she won by drawing heavily from her autobiography, penning a story about a “nerdy yet loveable teen” navigating the throes of teenaged love, friendship, and humiliation.

After high school, Jones attended Spelman College in Atlanta. A historically black liberal arts college for women, Spelman College inaugurated its first black female president, Johnnetta B. Cole, on the same day Jones arrived on campus as a first-year student. Of this historic occasion Jones notes, “Before this, I don’t think I had ever seen a black woman in a significant leadership position. I had never considered that possibility.”

Jones’s upbringing in Atlanta has strongly shaped her writing; the city serves as the setting for most of her works. She has said, “Atlanta is my natural habitat—I’m most myself when I’m home. It wasn’t until I left Atlanta, and started writing about it, that I realized how little the rest of the country knows about the city, or even the urban South.” Illuminating a piece of her city’s history, Jones’s first novel, Leaving Atlanta (2002), is a three-voiced, coming-of-age story set against the backdrop of the Atlanta Child Murders of 1979–81, and is based on her experience as a child in Atlanta during that period. It won the 2003 Hurston/Wright Legacy Award for Debut Fiction.

In 2005, she published The Untelling, a vivid, unforgettable portrait of a woman in her mid-twenties seeking to overcome the trauma of her past. It was awarded the Lillian Smith Book Award.

Her third novel, Silver Sparrow (2011), was added to the National Endowment for the Arts Big Read library of classics in 2016. It begins with the line, “My father, James Witherspoon is a bigamist,” and tells the story of a man’s deception, a family’s complicity, and the teenaged girls caught in the middle.
It is described by the Library Journal as a “graceful and shining work about finding the truth.”

Published last spring, An American Marriage was named an Oprah’s Book Club 2018 Selection, was longlisted for the 2018 Nation Book Award for Fiction and the Andrew Carnegie Medal for Excellence in Fiction, and was featured in President Barack Obama’s summer reading list. The story, centered on an African-American couple whose lives are shaken when the husband is arrested for a crime he did not commit, is described by the New York Times Book Review as a “clear vision of the quiet devastation of a family.” Of her writing, author Michael Chabon has said, “Tayari Jones is blessed with vision to see through to the surprising and devastating truths at the heart of ordinary lives, strength to wrest those truths free, and a gift of language to lay it all out, compelling and clear.”

Jones is a member of the Fellowship of Southern Writers. She has received a Lifetime Achievement Award in Fine Arts from the Congressional Black Caucus Foundation, as well as a United States Artist Fellowship, a National Endowment for the Arts Fellowship, a Radcliffe Institute Bunting Fellowship, and was named a Black Mountain Institute Shearing Fellow.

Thank you to our season sponsors and underwriters: