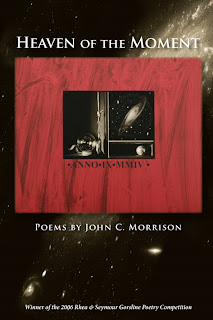 This month Paper Fort is featuring poems from books by the 2008 finalists for the Stafford/Hall Award in poetry.

Promise of More is from Heaven of the Moment by John Morrison.

John had this to say about writing it:

The poem probably began 20 years before it was written. My Uncle Bill, to make enough money for a holiday trip to Hawaii, planted his couple of acres in Doug Fir starts for a Christmas tree farm. I was over playing basketball with my cousin Scott. It was a typical Oregon day. Warm enough but then, all by degree, the mist got heavier, and then it drizzled, then heavier, heavier until, drenched, we were chased inside the garage where Uncle Bill offered us beer as we watched the rain and he said, “this is the rain that makes the trees grow.”

And it’s stuck with me that we live in a rain forest. And that means rivers and fish, and my folks spent several years smelting. One summer my brother and I were visiting my folks when they lived on a small house along the Tualatin River and they used our appetites to empty their freezer of their last smelt.

I may have forgotten the pain, but it seems after a few drafts of an opening stanza I hit upon the music, rhythm and tone that brought the rest of the poem pretty quickly, what became a homage to my parents’ Oregon generation. What was most difficult is still the crux of the poem,the “and I say without regret,” but I had to trust the voice at that moment whether it works or not, or is even true.

Forever, I thought, the freezer
would store an ice block or more of smelt,
silvery and silver-eyed and solid
in half-gallon milk cartons. My parents

and aunts and uncles went smelting,
wading into the Sandy or Clackamas River
to dip the long nets into the flashing
school. A hundred is a good day.

And I say without regret, when the season
came where the brothers and sisters
let pass the radio news that smelt
were running and stayed home, old,

aluminum nets hung in the garage,
I never knew I’d miss the fish. Not
for the salty bite, not for the crunch
of the spine or cornmeal crust,

but because they were on our table
an impossible plenitude. And I’d been served
my own oily, steaming plate stacked
with smelt, with the promise of more

if I wanted, and more after that,
and the house was a smoky light,
as it rained the steady rain of a forest,
a rain falling softly on all our rivers.
—John Morrison, from Heaven of the Moment (Fairweather Books)