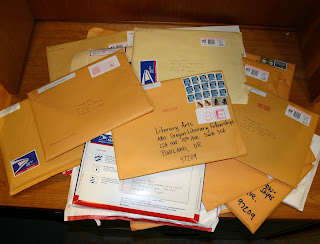 Out-of-state judges in each category are instructed to choose up to five finalists in each category,including a winner, using literary merit as the sole selection criterion. Literary Arts does not prescreen entries; all eligible entries are sent to the judge. Each judge has the option of selecting fewer than five finalists and of making no award. In all cases, judges’ decisions are final. The judges’ identities remain confidential until the finalists are announced in the fall.

The Charles Erskine Scott Wood Distinguished Writer Award is presented to an Oregon author in recognition of an enduring, substantial literary career.

The Stewart H. Holbrook Literary Legacy Award is presented to a person or organization in recognition of significant contributions that have enriched Oregon’s literary community.

The Walt Morey Young Readers Literary Legacy Award is presented to a person or organization in recognition of significant contributions that have enriched Oregon’s young readers.

Nominations for the Special Awards will be reviewed and recommendations made by the Oregon Book Awards Advisory Committee; their recommendation is then approved by the Literary Arts Board of Directors.

There is no application fee for Oregon Literary Fellowships. The deadline to apply is June 26, 2009.