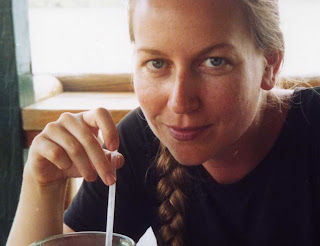 Repeat After Me by Rachel DeWoskin (Overlook, 2009)
—This debut novel by the author of the fabulous memoir “Foreign Babes in Bejing” is beautifully written and utterly absorbing. The characters are original and real and the story is expertly told, but more than anything I was enthralled by DeWoskin’s gorgeous and sharp prose.

The Glen Rock Book of the Dead by Marion Winik (Counterpoint, 2008) — Part memoir, part micro-essay collection, I read this book in one sitting. And then I read it again. Each short chapter is a perfect portrait of a dead person Winik once knew. Funny, sad, intense and alive. I gave this book as a gift to many friends in the past year.

Fragment of the Head of a Queen by Cate Marvin (Sarabande Books, 2007) — I love Cate Marvin’s poems. They’re elegant and razor sharp, passionate and emotional and always cool. I first heard her poems when I was at the Bread Loaf Writers’ Conference with her in 2001 and I still remember where I was seated in the audience in relation to her, still feel that same jolt of awe and recognition that I felt then when I read her poems now. Publisher’s Weekly called her “a postmodern Plath” and while I think that’s apt, it’s also true that Marvin is all her own. This book rocked my world.