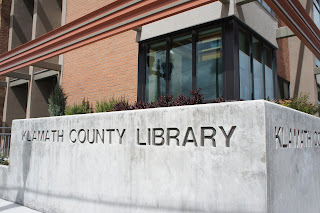 John Daniel and Jane Kirkpatrick were in Klamath Falls and Redmond this week, as part of the Oregon Book Awards Author Tour. The authors gave a reading on Wednesday night at the Klamath County library.

On Thursday, Jane presented a workshop at the Klamath County library, and Thursday night both authors appeared in Redmond as part of the Central Oregon Writer’s Guild meeting.

Below are two video clips from Jane’s workshop on Thursday. They are also posted on our Facebook page, along with a third one and more photos from the tour! Thanks to the writers, and our tour partners in Klamath Falls and Redmond, for another successful tour.