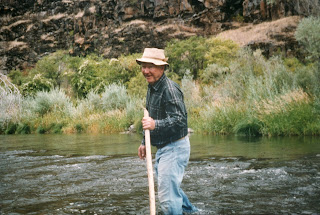 William Stafford’s work is both a pledge of allegiance and a request for allegiance–allegiance to “…a weather/ of things that happen too faint for headlines,/ but tremendous, like willows touching the river.” William Stafford asks us to give allegiance to what’s deeper than headlines, to pay attention to a deeper world. As we read his poems, we recognize this attention. As we accept his invitation to write our own poems, we begin to recognize the blessing that learning to attend can give.
– Oregon Poet Laureate Paulann Petersen, at The Oregon Cultural Trust blog

Here’s a list of some upcoming readings, in celebration of William Stafford and his work:

Sunday, January 22nd, 2 pm, Auditorium, Beaverton City Library, 12375 SW 5th St., Beaverton. www.beavertonlibrary.org. Hosted by FWS Board Member Don Colburn. Featuring three-time Oregon Book Award winner John Daniel who will read from William Stafford’s poems and his own and talk about Stafford’s life and work in relation to his own writing, both poetry and prose. Then there will be time for audience members to come forward and read a Stafford poem of their choice. Bring one! Contact: Linda Fallon lfallon@beavertonoregon.gov 503-526-2676 or Don Colburn doncolburn@msn.com 503-737-7819