MENUMENU
Carl Phillips was the judge in poetry for the 2012 Oregon Book Awards. He is the author of twelve books of poetry, most recently Double Shadow (2011) and Silverchest, forthcoming from Farrar, Straus & Giroux in 2013.  Also the author of Coin of the Realm: Essays on the Life and Art of Poetry, Phillips teaches at Washington University in St. Louis.
Here are Carl Phillips’ comments on the 2012 Oregon Book Awards finalists for the Stafford/Hall Award for Poetry:

Curses and Wishes by Carl Adamshick
Memory – whether as “a nest / of mud and grass hidden in the bright / summer branches” or as “that chain/we feel every time we walk” – is very much the subject here, in resonant tension with an understandable desire “to forget/what the world has shown you,” given what the world of these poems contains: war, holocaust, betrayal, broken childhoods, failures of head and heart. But throughout these poems, intimate and worldly at once, there’s also a dogged will to believe in life’s better possibilities, a commitment to something like devotion, in a world of fallen gods.

Sanderlings by Geri Doran
There’s a tidal pull throughout this collection, between the lost Atlantises of the lives we’ve lived and moved past, and the impulse not to give up on the chance, still, of shedding the losses that we carry with us, thanks to memory.  Part of this pull is, of course, desire – which, as Doran tells us, “has the pattern / of want, not want. The water cups the earth / and shudders back.” A lovely sensibility here, both vulnerable and brave. 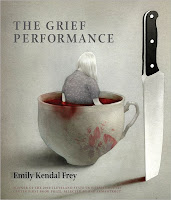 The Grief Performance by Emily Kendal Frey
“Death, my best and most/insincere opponent, / I’m ready for you this time / with fists of sand,” says Frey – she might as easily be addressing love, and the failure of it, or life, with its heady mix of joy and disappointment.  The speakers of these poems take on such opponents with an awareness of their own mistakes, even as they refuse to regret them. The result is a tough, deadpan, comic wisdom that I very much admire. 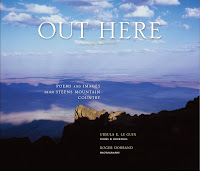 Out Here by Ursula Le Guin and Roger Dorband
“I want to tell of this / because it is / of great moment to me,” says Le Guin, in poems that unabashedly and without apology avow a love for landscape – a love whose sincerity is as refreshing as it is rare, in these ironic times. The book reads like a meditative praise-song not just for a particular landscape, but for our human place within the land that we shape and are shaped by, and as an elegant celebration of the “live desire” that we and the land have in common.

The Hut Beneath the Pine by Daniel Skach-Mills
I admire here how simplicity doesn’t have to compromise authority, how in fact the spare directness of attention can often be more persuasive. Reminiscent of the T’ang poets – I think of Wang Wei, especially, a similar painterly quality – these poems allow us to “shake off the dust of the world,” meanwhile quietly illuminating the tea ceremony’s role as a possible way toward the Tao, toward “letting whatever unfolds be enough.”
Friday, August 31, 2012 is the deadline to submit books for consideration for the 2013 Oregon Book Awards. The guidelines and applications can be found on Literary Arts’ web site. Contact Susan Denning for more information.