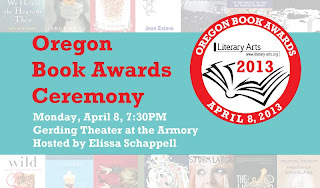 Literary Arts is pleased to announce the finalists for the 26th annual Oregon Book Awards. The winners will be announced at the 26th Oregon Book Awards ceremony on April 8, 2013. Elissa Schappell will host the ceremony, which honors the state’s finest accomplishments by Oregon writers who work in genres of poetry, drama, fiction, literary nonfiction and young readers literature.

Literary Arts is pleased to announce the recipients of the 2013 Oregon Literary Fellowships to writers and to publishers. The judges named eight writers and two publishers to receive grants of $2500.

The Oregon Book Awards & Fellowships are sponsored by the Oregon Arts Commission and Oregon Cultural Trust.