MENUMENU
You can cast your vote for the 2013 Readers’ Choice Award online at oregonlive.com/books.  The winner will be announced at the Oregon Book Awards ceremony. 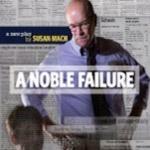 
A Noble Failure is a play about the human costs and societal ramifications resulting from the privatization of public education.

An excerpt from A Noble Failure

ROSALYN:  My point is that I’ve lived through a lot of change over the years—new tools, toys, and policies.  And what I’ve become increasingly aware of and concerned with is what stays the same.  The human capability to be both wondrous and asinine—that little perch of humanity wedged between the indifference of the gods and the bestiality of the animals.  That’s the place in which literature—great literature— rests, don’t you think?