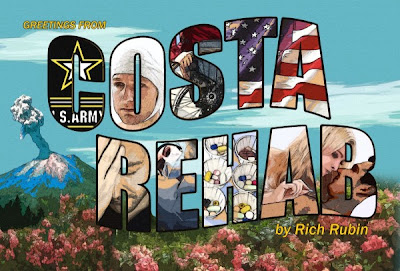 Description
Costa Rehab is a very raunchy comedy with an underpinning of great sadness.  Focusing on a trio of young injured Iraq War veterans and the nurses who care for them, it examines the devastating toll of war and war’s oft-times tragic absurdity.

An excerpt from Costa Rehab
Voiced by Davis, a young injured Iraq War veteran, a double amputee:
DAVIS But you know something?  When you get right down to it, what fuckin’ difference does it make?  I mean, what woman in her right mind is gonna wanna hang around…(indicating his broken body) this?…Fuck.  It’s like, here I am.  This is me.  Except I dunno who the fuck I am anymore.  And then it gets worse…’cause sometimes I do know.

About the Author
Rich Rubin is a multi-award winning playwright whose plays have been produced at theaters throughout the U.S., including New York, Chicago, Seattle, and Los Angeles.  Internationally, his work has been staged in Berlin, Sydney, Singapore, Mexico, Canada, and the U.K.  Rich is a proud member of the Dramatists Guild and Portland’s Nameless Playwrights and P-town Playwrights.