You can cast your vote for the  2013 Readers’ Choice Award online at oregonlive.com/books. The winner will be announced at the Oregon Book Awards ceremony on April 8th at the Gerding Theater at the Armory. 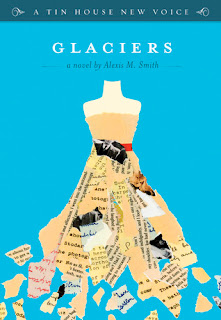 Category
Fiction
Publisher
Tin House Books
Description
Glaciers follows Isabel through a day in her life in which work with damaged books in the basement of a library, unrequited love for the former soldier who fixes her computer, and dreams of the perfect vintage dress move over a backdrop of deteriorating urban architecture and the imminent loss of the glaciers she knew as a young girl in Alaska.

An excerpt from Glaciers

Isabel finds the postcard of Amsterdam on Thursday evening, at her favorite junk store, across from the food carts on Hawthorne.  It is a photograph of tall houses on a canal, each painted a different color, pressed together and tilted slightly, like a line of people, arm in arm, peering tentatively into the water.  The picture has a Technicolor glow, the colors hovering over the scene rather than inhabiting it.  Isabel turns the postcard over, expecting nothing–an antique white space never utilized–like others on the rack, bought decades ago on long-forgotten vacations, and never mailed.  But Amsterdam had been stamped; Amsterdam had been posted.  The postmark is dated 14 Sept 1965 and there is a message, carefully inscribed:

Dear L–
Fell asleep in a park.  Started to rain.  Woke up with my hat full of leaves.  You are all I see when I open or close a book.
Yours,
M

Alexis M. Smith grew up in Soldotna, Alaska, and Seattle, Washington.  She holds degrees from Portland State University and Goddard College.  She has a son and two cats, and they all live together in a little apartment in North Portland.