Ursula K. Le Guin appeared at the Dallas Civic Center on Tuesday, April 22, as part of the Oregon Book Awards Author Tour. Le Guin is the 2014 winner of the Ken Kesey Award for Fiction for her selected short stories The Unreal and The Real.

This year’s judge in fiction, Alan Cheuse said about the collection: “This Oregonian who has invented worlds within worlds and worlds upon worlds, from fantasies beneath the sea to some of the most powerful imaginative fiction about possible planets in the great cosmos around us, has for a number of decades produced thoughtful and entertaining short fiction that also makes us think. The stories in these two volumes make clear that she works in the tradition of American science fiction and walks as well in the path of Twain and Borges, and shows herself finally as one of the masters of short fiction in our time.” 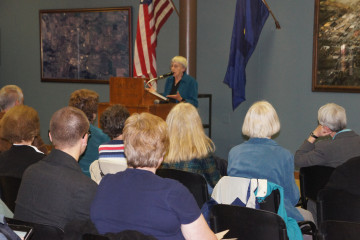