Late Night Library brought a chest of books, raffle tickets, essayist
Leslie Jamison, poet Timmy Straw and a keyboard to Literary Arts on
October 23rd. Paul Martone is the Executive Director of Late Night Library
and he propelled the evening with his enthusiasm. Prior to the
performances, Martone explained that Late Night Library began as a tumblr
with sporadic podcasts discussing newly published books. Their reputation
has grown rapidly – the house was packed. In 2013 they started the
Debut-litzer prize for debut works in fiction, creative nonfiction, and
poetry. Leslie Jamison was the Debut-litzer prize judge for fiction in 2013.

Jamison read from her book The Empathy Exams, an exploration of how it
feels to feel for others. Her experiences with debilitating diseases were
the catalyst for both the essays from which she read. But these weren’t
her diseases. The first essay focused on her brother, who awoke one
morning with half his face paralyzed from Bell’s palsy. The second essay
described Morgellons disease, which causes people to experience crystals
or fibers or twine or flakes growing out of their skin – but the symptoms
are not visible to anyone else. The Morgellons essay, Jamison said,
believed in her when nobody else did. She knew there was a story worth
telling, and she told it well. Her essays are a conduit for pain and
love, passed from person to writer to reader.

Timmy Straw was born in Corvallis, Oregon. Recently she lived in
Appalachian Virginia and those mountains left their mark on her work.
Martone introduced Straw as a poet and musician, and she acted as both
simultaneously – emotional lyricist and talented pianist. But it’s not
just her lyrics which evoked pastoral landscapes, her pained voice took
the audience from Portland and left them somewhere ethereal. Her recently
released CD is titled State Parks. She is now a Portland resident.

The night ended with a raffle – giving away copies of The Empathy Exams
and State Parks. Paul Martone’s parting comments were heartfelt thanks to
Literary Arts and everyone who supports him with Late Night Library.

Literary Arts would like to return thanks to Paul Martone and everybody at
Late Night Library. Thanks to Timmy Straw and Leslie Jamison. Thanks to
the audience who enjoyed an intimate and emotional evening. 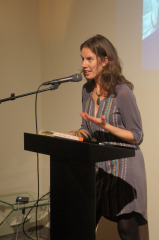 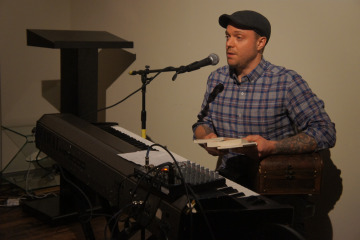 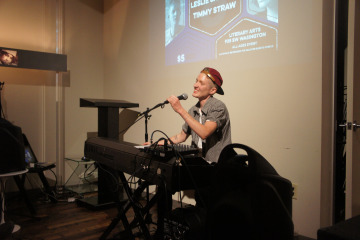 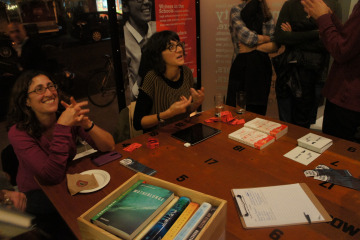