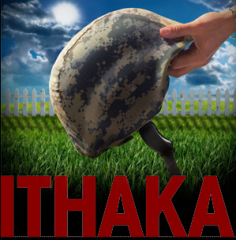 Lanie has just returned from her latest tour in Afghanistan but this time things are different; home doesn’t feel right and nothing makes sense. After a blow up fight with her husband propels her to skip town, she undertakes an Odyssean journey through the American landscape battling her monsters, trying to find her way home.

Andrea Stolowitz’s plays have been presented nationally and internationally at theaters such as The Long Wharf, The Cherry Lane, and New York Stage and Film. A recipient of Artists Repertory Theater’s $25,000 New Play Commission, Andrea premiered her newest work Ithaka at the theatre in 2013. Andrea’s play Antarktikos was awarded the 2013 Oregon Book Award for Drama.

Dear Mom and Chrissy-
I’m fine.
We’ve been through four and a half months here and sometimes it feels like four and a half years and other times four and a half minutes. The roads are so bad and we spend so many hours in the truck I can feel my teeth rattling even when we’re not driving. I think of you guys a lot and I try to picture the house.
I look different now. I mean I cut off all my hair. Well a friend of mine did it for me. Chrissy, I got the photo of you and Bo and the wedding dress. Of course Ill sing.
We went to a wedding here once. We had to search everyone so it wasn’t like we were guests, but it made me think of you.
I don’t know if I’ll ever send this. I write a lot of letters I don’t mail. And sometimes my hand just gets tired in the middle and I stop writing. And sometimes I just think of the letter I would write if I had a pen.
It’s hard for me to hear in my right ear. It feels like it needs to pop, like remember when you and me and Chrissy took the airplane to see Grandpa in Texas? Remember how Chrissy cried about her ear? That’s how I imagine it feels.

“Stolowitz’ writing feels honest and authentic in its details of military life, but more importantly in its evocation of the profound — if sometimes goofy — joys of friendship,and in its musings about war and society, attachment and loss, life and death.”

The story itself is relatively simple, but the way it leaps into the past and in and out of dream sequences keeps us off balance, and that ensures that in the audience, we don’t simply shut down, thinking we already know this story. In fact, we don’t—not these particulars at least, not felt and expressed in this way. And that may be the primary achievement of “Ithaka.”