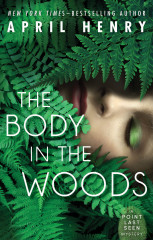 The Body in the Woods by April Henry

Alexis, Nick, and Ruby have very different backgrounds: Alexis has spent her life covering for her mom’s mental illness, Nick’s bravado hides his fear of not being good enough, and Ruby just wants to pursue her eccentric interests in a world that doesn’t understand her. When the three teens join Portland County Sheriff’s Search and Rescue, they are teamed up to search for a autistic man lost in the woods. What they find instead is a dead body. In a friendship that will be forged in danger, fear and courage, the three team up to find the girl’s killer—before he can strike one of their own.

This first book in April Henry’s Point Last Seen YA mystery series is full of riveting suspense, putting readers right in the middle of harrowing rescues and crime scene investigations.

April Henry knows how to kill you in a two-dozen different ways. She makes up for a peaceful childhood in an intact home by killing off fictional characters. There was one detour on April’s path to destruction: when she was 12 she sent a short story about a six-foot tall frog who loved peanut butter to noted children’s author Roald Dahl. He liked it so much he arranged to have it published in an international children’s magazine. By the time she was in her thirties, April had started writing about hit men, kidnappers, and drug dealers. She is now a New York Times bestselling author of over a dozen mysteries and thrillers for teens and adults, with five more under contract. She lives in Portland, Oregon, with her family

Excerpt from The Body in the Woods

For Alexis Frost, Nick Walker, and Ruby McClure, it all started with a phone call and two texts. It ended with fear and courage, love and loathing, screaming and blood. Lots of blood.

When the classroom phone rang in American history, Alexis Frost straightened up and blinked, trying to will herself awake as the teacher answered it. She managed to yawn without opening her mouth, the cords stretching tight in her neck. Last night had been another hard one.

“Alexis?” Mrs. Fairchild turned toward her.

“Yes?” Her heart sped up. What was it this time? The possibilities were endless. None of them were good.

“Could you come up here, please?”

Mrs. Fairchild was looking at Alexis as if she was seeing her in a new light. Had it finally happened, then, the thing she both feared and longed for? Had something happened to her mother?

“A fast-moving and well-constructed mystery… Each teen comes from a unique and compellingly drawn background, expressed with impressive effectiveness given how quickly the plot moves… Short, obsessive chapters from the unidentified killer’s point of view add to the suspense, and enough clues are dropped as to the killer’s identity that astute readers will be able to solve the puzzle before the final, high-stakes climax. A quick, thrilling read that doesn’t skimp on characterization.”

“Three Oregon high school students help the local police by volunteering with Portland Search and Rescue in this fast-paced kickoff to Henry’s Point Last Seen series. … Henry (The Girl Who Was Supposed to Die) is well within her wheelhouse with this tense mystery, which can read a bit like a throwback to “teen detective” novels from decades past. The author’s expertise at plotting a murder mystery and knowledge of police procedure are evident.”

“In the first in a thrilling new young adult mystery series from best-selling author April Henry, three teens join Portland’s Search and Rescue (SAR) team for very different reasons. For Nick, who lost his father in the Iraq War, volunteering with SAR represents true courage and leadership. For Alexis, SAR means overcoming a broken home and standing out on college applications. But for awkward and lonely Ruby, SAR is everything. When the three teens are called in to find a lost autistic man, they find a dead girl instead. Ruby fears Portland has a serial killer targeting homeless girls, but the lead detective doesn’t believe her. Ruby, Nick and Alexis investigate the murder on their own—but the killer soon turns his attention to them. Filled with facts about real crime scene investigations and search and rescue teams led by highly trained teenagers, this engaging new series will appeal to CSI fans and mystery readers alike.”