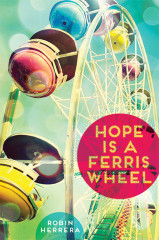 Hope is a Ferris Wheel by Robin Herrera

Ten-year-old Star Mackie lives in a trailer park with her flaky mom and her melancholy older sister, Winter, whom Star idolizes. Moving to a new town has made it difficult for Star to make friends, when her classmates tease her because of where she lives and because of her layered blue hair. But when Star starts a poetry club, she develops a love of Emily Dickinson and, through Dickinson’s poetry, learns some important lessons about herself and comes to terms with her hopes for the future. With an unforgettable voice with a lot of heart, Hope Is a Ferris Wheel is the story of a young girl who learns to accept her family and herself while trying to make sense of the world around her.

Robin Herrera received her MFA in writing for children at Vermont College. This is her first book. She lives in Portland, Oregon.

Excerpt from Hope is a Ferris Wheel

Everyone at Pepperwood Elementary knows that I live in Treasure Trailers, in the pink-tinted trailer with the flamingo hot-glued to the roof. The problem is, I only told four girls, the ones who were standing by me the first time we lined up for recess.

“Isn’t that next to the dump?” one of them asked.

The third one behind me scowled and said, “My mom says only drug addicts live here.”

“There’re no drug addicts,” I said. “Well, maybe ther’re drug addicts. I haven’t met everyone yet.”

“Hey,” said the girl in front of me. She must have overheard. “What’s the deal with your hair?”

(starred review) “Herrera’s first novel is quite accomplished, with plenty of heart and humor […] Star is a unique, determined, and loving child making the best of a bad situation; readers cannot help but root for her.”

“Debut author Herrera deftly combines family drama with a school and friendship story….The author handles the Mackie family’s financial and domestic situation with delicacy and respect, allowing readers to gradually get to know the difficulties her characters face… Well-constructed, thought-provoking and appealing, this first effort bodes well for the author’s future.”

“Herrera’s vivid debut introduces a contemplative girl who finds an unlikely community at her new school… A tender and truthful novel that addresses stereotypes without promising easy answers or cookie-cutter closure.”