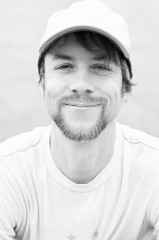 Justin Hocking served as Executive Director of the Independent Publishing Resource Center (IPRC) from 2006–2014. He is the current Chairperson of the IPRC’s Certificate Program in Creative Writing, and a co-founder of the Wilderness Writing MFA at Eastern Oregon University.

I’m inspired by literary and visual art that takes big formal and emotional risks. Lidia Yuknavitch’s The Chronology of Water is a longtime favorite. It’s technically a memoir, but it experiments with poetic language, non-sequential narrative, and new ways of exposing the self. The writing is highly intelligent, but it moves well beyond the intellectual into the realm of the body—there’s a physicality to Lidia’s work that I just love. I’m also a fan of poet/memoirist Nick Flynn, and Oregon-based author/naturalist Barry Lopez. I’d be remiss not to mention Melville—especially his blending of so many genres, voices, and modes of storytelling in Moby-Dick.

Somewhat disciplined, but slow. There’s a narrow window of time in the mornings when I have to start writing. If I get caught up with email or social media, the window snaps shut and my writing day is over. So I generally warm up in my journal for a few pages, until I’m ready to move to the computer and get cracking on one of several projects. My process has a kind of collage quality—most of my days are spent testing for patterns among disparate ideas, and slowly puzzling together words and sentences and research. I try to stick at it until late afternoon, and only then can I catch up with email and facebook/twitter.

Along with a grant from the Regional Arts and Culture Council, the Oregon Fellowship gives me the opportunity to spend the majority of my days writing. It’s the first time in my life I can say this. That’s very exciting. And slightly daunting—so much solo time, just me and screen. But it’s going well so far.

I’m putting together a collection of short stories. And I’m about 100 pages in to another hybrid-memoir project.

Keep taking measured risks in your life and your work. And keep applying! (I think this was my third or fourth try.)

“Because things are out of equilibrium, we have an epidemic,” asserts the Narrator of Justin Hocking’s beautifully poignant short story “Gallery.” A professor of forestry, and the patriarch of a family as ravaged by mental illness as the forest’s trees are infested by voracious Pine beetles, he is positioned as the solver of problems; his colleagues and students expect him to rescue the trees from destruction; his wife is pleading for him to track down and save their missing, off-his-meds son. But Hocking, with his gift for finding the emotional, psychological jewels in scientific detail, infuses his Narrator with the painful wisdom that often “nothing practical can be done to save the forest” – or the devastated marriage, the desperately ill child, or the unstable ecosystem that is life itself. For “it would take millions and millions of gallons of pesticides to solve the problem, and this would kill off beneficial insects and animals, too” – one can only try to control what is brutally destructive without also destroying what is most powerfully and profoundly generative.

from the short story “Gallery”

“I’m deeper into the pattern now,” he says. “Last week was just the beginning, a doorway. The solution is near. It has to do with quantum physics, that’s all I can say.”

“A solution to what, Scott?”

“A solution for the forests,” he says. “What else?”

I think of an art gallery. Vancouver or Los Angeles or New York, all places we know he’s been. I ask him which art gallery, but he corrects me.

“A gallery,” he says. “A tunnel. I crawled in through the pitch tube. I’m with the beetles now, learning their language. Infiltrating their culture. I’m going to rescue the trees.”

In class that afternoon, I explain how Pine Beetles are important in the life of healthy forests, how they attack old or weakened trees, break them down, engendering growth of new saplings. For eons, sub zero winter temperatures kept them in check. But now, with global climate change, winters are no longer cold enough to keep their numbers down. Because things are out of equilibrium, we have an epidemic.

“How do we restore balance?” the students ask.

“I don’t know,” I tell them. I explain that, along with climate change, one of the problems is our overprotection of the forest, that if we’d thinned them out, cut down the dead trees or let forest fires run their course, we’d be in less of a fix.

“So there is a solution,” they say.

They still want me to fix it. They get angry, they leave the room.

They wish we could discuss more benign subjects—forest stewardship, wildlife sanctuaries. Sometimes I wish that, too.