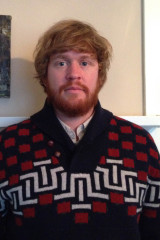 Cheston Knapp is managing editor of Tin House magazine and executive director of the Tin House Summer Writers’ Workshop. His work has appeared in Tin House and One Story.

I’m not sure I really believe in “inspiration” as it’s commonly conceived. It’s come to feel washed out and fuzzy, a little Oprah-y, to lack the experience of creation’s scrotumtightening blurgh and blegch. It might even be what some linguists call a skunked term, who knows. The philosopher Merleau-Ponty has an essay called “Cezanne’s Doubt” in which he writes: “Before expression, there is nothing but a vague fever, and only the work itself, completed and understood, will prove that there was something rather than nothing to be found there.” I cast my lot with that phrase, “vague fever.” It’s about as concrete as I’m comfortable getting about this…

Some folks are just so frightfully articulate about their process that I’ve come to see it as a gift, one I simply do not have. The best I can do is to direct your attention to this video, which pretty much sums things up I think.

Hmm. Most exciting? There’s so much! Prolly the dough, but the wave of dopamine was pretty gnar until I sat down to write again.

Again I must resort to a video.

To quote a fellow Oregonian: “Just do it!”

Although I read a lot of amazing essays for this fellowship—the majority of submissions really were admirable—this was the first I truly savored. Knapp’s story of attending a skate camp as a grown man is self-deprecating, big-hearted, intelligent, and good-humored: an essay that interrogates the notion of nostalgia and treats it like an exotic malaise. But also? It’s funny and lively and entertaining. The narrator paints himself as loveable schlub, a kid-man who deploys language in effortlessly innovative ways. He uses words like “becondomed,” “sissified mushiness,” and “absquatulated,” and makes them all feel necessary. In describing the room he chose at the skate camp’s “Adult House,” Knapp writes: “During a quick survey of the place, my self-preservation antennae noted that while the door to the bathroom in the hall will close, the latch doesn’t catch, let alone lock, so just heads-up. On a sliding scale of coziness, I’d say we’ve ticked past Ski Chalet, past Dorm Room, and that we’re maybe one shat-up toilet or busted pipe short of Orphanage.” Bottom line: reading Knapp’s sentences is sort of like watching a skater land a particularly gnarly trick; you admire the grace, the technical skills, the inventiveness and style required to pull it off.

Orientation. It’s Sunday, June 16, 2013—Father’s Day and the first of Windells’ Summer Session 2. Late afternoon and the sun’s out and the sky’s a kid’s picture of the sky, with great big cotton-ball clouds seemingly glued to a lucid blue. I’m sitting with the other skateboarders along the coping of a drained pool in the Concrete Jungle part of campus, which is tucked in the woods off Highway 26 in Welches, OR, fifty miles east of where I live in Portland. My board is in my lap and my helmet’s beside me and I’m wearing my favorite of the several new t-shirts I bought for camp. It says “Research” across the chest and I think it’s supposed to convey a complex irony that eludes me, but I’m not wearing it like that anyway. My legs are dangling beneath me with a pleasant sense of groundlessness that I loved as a kid, sitting in chairs and on couches, and didn’t know I missed. Until recently, I hadn’t realized that it was possible for one’s body to miss something that one’s mind didn’t also miss. More than that, though—that one’s mind wasn’t even actively aware of.

After a brief camp-wide introduction in B.O.B., a hangar that houses the indoor skate park, the trampolines, and the pit of foam blocks, we were split off from the other campers, the snowboarders and skiers, for our sport-specific briefing. The facts here are simple enough: a month back I signed up to attend Windells’ Adult Skateboard Camp. I paid online—a thousand bucks for the week—and emailed over the twenty-page packet of waivers and my insurance information, as well as a physical form my doctor had to fill out. But like so much about my life recently, knowing these facts doesn’t diminish a certain shimmery unreal quality that clings to them and I almost feel like I need proof that I’m really here. The best I can find is the neon yellow wristband I’m wearing, its adhesive so strong that it’ll likely depilate my arm hair for days to come. This takes me back about an hour, to when I checked in and learned, among other things, that to remove the wristband would bar me from all camp-related activities, including meals and the dodgeball tournament. A small comfort, but I’ll take anything I can get in the way of continuity. Feeling lately’s been that whatever ligatures were used to knit me together have stretched thin, if not snapped entirely.

Because I’ve come alone, one of my unstated goals entering the week was to make a friend, a buddy. Best-case scenario, to get a nickname. I imagined sitting in the hot tub at the Adult House that the website boasted of and swapping stories with my fellow campers, slightly embellished tales of how we’d slain our local spots growing up, shredded ledges and conquered sets of stairs. I’m perhaps a skosh over-eager to make this happen, which must be why I venture, to no one in particular, that we’ve all gathered here to get our bearings. When no one laughs, I spin one of the wheels on my board in a schmucky hint-hint but don’t even get a sympathetic titter. The silence that ensues fills me with the dread loneliness of a failed joke. And for a moment I worry that I’ve inadvertently marked myself as some kind of poser, what with my new t-shirt that still has its fold creases and my newish board and my shoes that are hardly scuffed and my lickspittling joke. I stop short of acknowledging the truth: that that’s exactly what I am, and in ways far deeper than I’m willing to admit.