On October 4, Jane Smiley gave the first lecture of the 2015/2016 season of Portland Arts & Lectures. When Smiley took the stage, she opened up to the audience with ease and framed her lecture around the connections between politics and the novel. Smiley explained that novels are “inherently political” and that for a novel to be successful, an author must create a political world around the characters. She then discussed how novelists are political visionaries and described the political significance of novels like Harriet Beecher Stowe’s Uncle Tom’s Cabin, Charles Dickens’ Hard Times, and Virginia Woolf’s Orlando. Smiley expressed her desire to evoke political change in a similar way as these authors have with their novels. Smiley described how she began to ask herself, “What is my job as a novelist?”

Smiley’s main political grievance is climate change. She talked about the project, Letters to the Future, which comprises a group of authors, including Smiley, who write letters to combat climate change. Smiley read her letter from the project, which was written to her future grandchild about how climate change happened from her point of view. Her grandchild’s world is now an apocalyptic version of the United States, destroyed by global warming. Smiley laments in her letter that for our time, “transportation was harder to give up than the future was.”

Throughout both the lecture and Q&A session, Smiley was extremely witty and warm. Although her lecture was focused on politics, she described her political frustrations in a humorous way. The Q&A session revealed more of Smiley’s life outside of writing. Smiley enjoyed answering questions about her four thoroughbred horses and her animal translator, which she thought was simultaneously absurd and hilarious. She also admitted that her favorite member of The Beatles was George Harrison.

Smiley has published several novels, most notably A Thousand Acres, which she won the Pulitzer Prize for Fiction in 1992. The next lecture in the Portland Arts & Lectures series will be with Anthony Doerr—author of All The Light We Cannot See, which won the 2015 Pulitzer Prize for Fiction—on November 19. Portland Arts & Lectures works in association with OPB, and the live events are broadcast statewide. The program also connects these authors with local Portland schools through classroom visits and writing workshops. Smiley worked with students from Gresham High school before giving her lecture, which you can read about here. 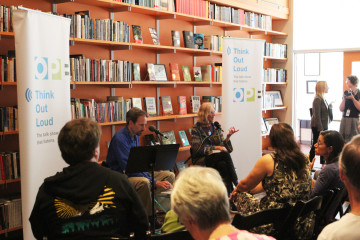