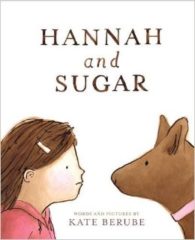 Hannah is afraid of her neighbor’s dog, Sugar. But one day Sugar goes missing. Will Hannah be able to overcome her fears and make a new friend?

Kate Berube is an author and illustrator who lives in Portland. She earned her BFA from The School of the Art Institute of Chicago. In addition to writing and illustrating Hannah and Sugar, she illustrated The Summer Nick Taught His Cats to Read by Curtis Manley and My Little Half-Moon by Douglas Todd Jennerich. 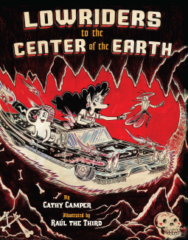 When Elirio Malaria, Lupe Impala and El Chavo Flapjack Octopus discover their cat Genie has been catnapped by Mictlantecuhtli, the Aztec God of the Dead, they set off in their galactically customized lowrider on a wild road trip to the underworld, in search of their gato.

Cathy Camper is also the author of the first volume in the Lowriders Trilogy, Lowriders in Space, with a third volume in the works. She has a forthcoming picture book, Ten Ways to Hear Snow, and also wrote Bugs Before Time: Prehistoric Insects and Their Relatives. 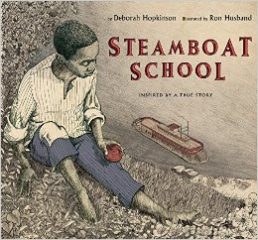 Steamboat School is a historical fiction picture book set in 1847 St. Louis. It is illustrated by Ron Husband, one of the first African American animators at Disney.

Deborah Hopkinson has written many books for young readers and is a former Oregon Book Award winner. Her 2017 titles include A Letter to My Teacher and Independence Cake. She presents in schools across the country, where she has encountered wonderful students and educators. Deborah lives in West Linn. 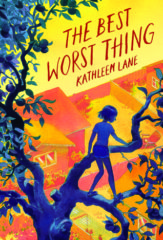 Kathleen Lane writes short fiction and stories for young readers. She is a 2017 recipient of an Oregon Literary Fellowship and currently working on a short story collection and young adult novel. Kathleen lives in Portland where she co-hosts the art and literary event series SHARE, teaches writing through Literary Arts’ Writers in the Schools program, and thanks to a grant from the Regional Arts and Culture Council, will soon begin working with sixth-graders at three Portland middle schools. 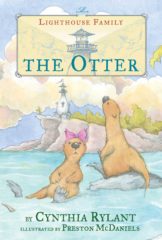 The Otter is the sixth book of the Lighthouse Family series, in which the family assists an otter in need. With the help of some friendly dolphins and sawfish, the lighthouse family devises a plan to free the trapped otter—and makes two new friends along the way.