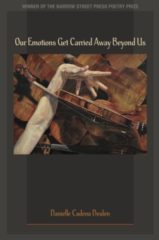 “The poems of Danielle Deulen’s Our Emotions Get Carried Away Beyond Us are as superbly ambitious as they are fiercely intimate. Whether looking through Lacan at a child’s split reflection in a carousel mirror, or careening through a litany of daily human catastrophes we bring about because (perhaps a paradox of privilege) ‘we are bored,’ these poems never just intellectually astound—they also burn.”  -Rebecca Lindenberg

Danielle Cadena Deulen is also the author of Lovely Asunder (winner of the Miller Williams Arkansas Prize) and The Riots (winner of the AWP Prize in Creative Nonfiction). Our Emotions Get Carried Away Beyond Us is the winner of the Barrow Street Prize. She teaches at Willamette University and edits at Acre Books. 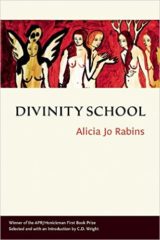 Divinity School is a wide-ranging exploration of spirituality, sex, travel, food, holy texts, and coming of age. Poet Alicia Jo Rabins brings a searing eye for surreal beauty in everyday life with a deep knowledge of wisdom literature, and creates a modern manual for living, a fearless investigation of how we learn to live in a human body both prism and flesh.

Alicia Jo Rabins is a writer, musician, and Torah teacher. Divinity School won the APR/Honickman First Book Prize. Rabins tours with her songwriting/violin-looping project, Girls in Trouble. Born in Portland and raised on the East Coast, she lives in Portland with her partner and their two small children. 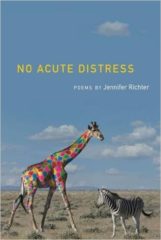 Framed by a series of poems based on classic joke forms, No Acute Distress examines the thin line we sometimes find ourselves walking between comedy and tragedy. In poems that illuminate experiences such as marriage, motherhood, and illness, the book suggests that our daily lives often contain everything at once: light and shadow, epiphany and struggle, chuckle and sigh.

Jennifer Richter’s first book, Threshold, was selected by Robert Pinsky as an Oregon Book Award Finalist. No Acute Distress was named a Crab Orchard Series Editor’s Selection. Richter teaches in OSU’s MFA program and is working on her third collection inspired by recent earthquake predictions and various trajectories from shattered to whole. 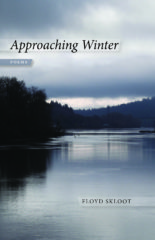 Anchored by love, immersed in life by the Willamette River, Floyd Skloot’s eighth collection of poems evokes memory’s fluid, dynamic, elusive nature and the way past and present interpenetrate. Approaching Winter is concerned with the slippery borders of perception, the zone where time is open, where the distinction between sleep and wakefulness, light and dark, consciousness and unconsciousness is uncertain.

Floyd Skloot is a poet, novelist, and creative nonfiction writer whose work has won three Pushcart Prizes, the PEN USA Literary Award, two Oregon Book Awards and two PNBA Book Awards. In 2010 Poets & Writers named him “One of 50 of the Most Inspiring Authors in the World.” 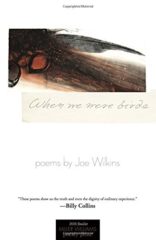 When We Were Birds (University of Arkansas Press) by Joe Wilkins

A panoply of voices are at play in When We Were Birds—the escaped convict, the late-night convenience store clerk, and the drowned child all have their say—and as this motley chorus rises and crests, we begin to understand something of what binds us and makes us human: while the world invariably breaks all our hearts, Wilkins insists that is the very “place / hope lives, in the breaking.” Within a notable range of form, concern, and voice, the poems here never fail to sing.

Joe Wilkins is the author of a memoir, The Mountain and the Fathers, and two other books of poetry, Notes from the Journey Westward, and Killing the Murnion Dogs. Wilkins lives with his family in western Oregon, where he teaches writing at Linfield College.