As part of the 2018 Everybody Reads program, a partnership with Multnomah County Library, Literary Arts brought Mohsin Hamid to Parkrose High School’s library for a Q&A with over 60 students on April 5. Hamid’s most recent novel, Exit West, is the 2018 selection for Everybody Reads, a community project that culminated with Hamid’s lecture at the Arlene Schnitzer Concert Hall that evening.

He doled out helpful advice about bullies, peaceful protest, and how to write female characters that break their stereotypical molds.

“Being a writer is pretty much failing all the time,” he said.

Having moved between California and Pakistan as a child, “I didn’t know anyone who wrote books for a living.” It wasn’t until he took a creative writing class as an undergrad in New Jersey that he began to realize that writing was something he wanted to do. A class where you just make things up, and you get credit for it? “What’s the catch?” He thought.

One student asked where he found the inspiration to write. Hamid talked about how, for him, inspiration comes from sitting down and putting in the work, and allowing your mind to wander, and be creative. He referenced the Israeli author, Amos Oz who said “Now I think of my work as that of a shopkeeper: it is my job to open up in the morning, sit, and wait for customers. If I get some, it is a blessed morning, if not, well, I’m still doing my job.”

Hamid also likened writing to flying, as envisioned by Douglas Adams in The Hitchhiker’s Guide. “There is an art to flying, or rather a knack. The knack lies in learning how to throw yourself at the ground and miss.” You just keep writing and keep writing until eventually you miss the floor.

“It won’t be easy, but it will be worth it…. There is no one right way of doing things. You have to figure out what is right for yourself.”

While writing, whether you are trying to get published, or just trying to become a better writer, Hamid talked about having to write, and rewrite and rewrite. He recommends, “Don’t think of it as failure.” Try instead, to think about what you learned from each draft that didn’t work the way you wanted it to.

The conversation moved to Hamid’s new novel. Exit West follows Nadia and Saeed, two lovers who meet in a country on the brink of civil war. While their city begins to crumble Nadia and Saeed decide to escape through one of the mysterious doors they’ve been hearing about, that transports them to a new place. About his book, Hamid said that he wanted to create a chance for the reader to feel something. There’s strong themes of migration and immigration. He wanted to explore the question ‘Can we begin to imagine a world in which migration is amazing?’

The discussion ended with students asking Hamid’s opinion on peaceful protests and bullying.

Hamid said that he experiences peaceful protest frequently with his five-year old son who, he feels, has the right to protest his bedtime. Peaceful protests, he said, have been used historically to create change. They have been effective in the past and will continue to be so. It is necessary, sometimes, to change the status quo and to continue to make pushes for a better world.

One student asked his opinion on bullies. “[In childhood] you will be bullied and have bullied others. That is not to be taken lightly.” Using power over those less powerful Hamid says means that the person doing the bullying is giving up their potential. “Raise your voice — especially as a child — you don’t have to settle [problems] amongst yourselves.”

At the end of the conversation, the bell rang, signaling the end of the school day, and multiple students lined up to get their books signed by the author, who was happy to oblige.

The following morning, Hamid visited with 35 students at Wilson High School. He answered their questions about dealing with setbacks as a writer, his favorite places in the world, and how he comes up with his stories. Again, Hamid had great wisdom to share about creativity, being an empathetic human in the world, and resilience.

Literary Arts wishes to thank the Parkrose High, particularly Stuart Levy for helping to organize the events. We also wish to thank Cassie Lanzas at Wilson High School and the students who came prepared with thoughtful questions. Last but not least, Literary Arts also wishes to thank Mohsin Hamid for his time and insight into writing and life. 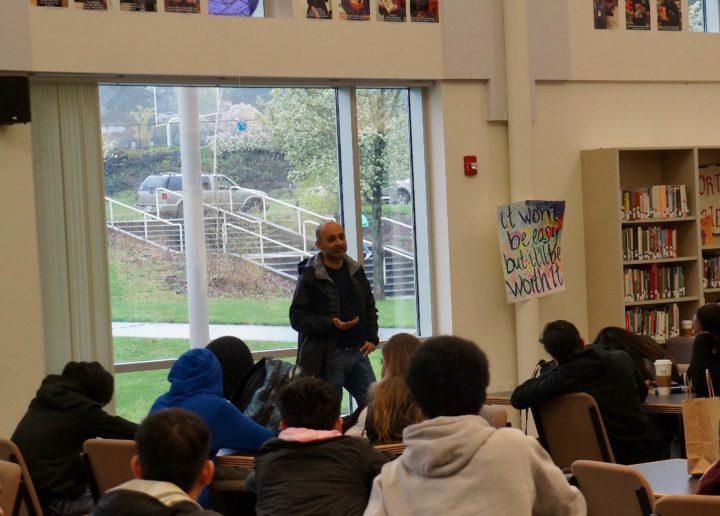