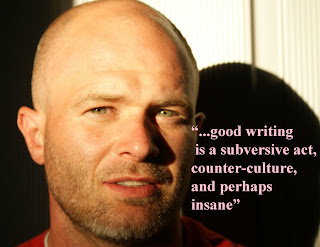 Peter Brown Hoffmeister was awarded an Oregon Literary Fellowship in 2006. In 2011, Soft Skull Press will publish his first book, a memoir, The End of Boys.

We asked Peter a few questions about his writing life and his path to publication:

Paper Fort:What was your process for writing The End of Boys?
Peter: After my first daughter was born, I committed to being tired. I thought, if I’m already going to skip sleep, I may as well skip a little more sleep to get up early and write every single day. And then, with all this new writing time, I wrote a big, long, horrible novel. It had every cliche coming-of-age-first-novel convention: The wise friend, the father-son issues, the near-death experience for the protagonist. But I spent two years writing and revising that manuscript, and I didn’t even know how bad it was. Then my writing partner at the time, Jose Chaves, told me to stop. To not go forward with that book. That I couldn’t. It was embarrassing.

I had this real, true, dark story in my past, a story of three years that nobody in my family wanted to relive. And Jose encouraged me to face that story, to start now that I had a novel warm-up.

I talked to my wife, Jennie, and she said she’d support whatever I chose to do. She’s incredibly supportive that way. So I started writing the real story, my memoir, the one I was afraid of, the book I had to get past before I could move on.

From there, the book was therapy. I relived the scenes so many times that they now hold no emotional power for me. I know they’ll be difficult for my family to read for the first time, but the individual scenes don’t mean much to me anymore. Thirteen drafts and six years later, I’m trying to perfect imagery in The End of Boys.

Can you describe its path towards publication?

I just read an interview in Poets and Writers about Major Jackson, how everything went the way he wanted to, how he was given a lot of support early on, both financially and emotionally. Everyone helped with his craft, and he won every fellowship and grant.


That wasn’t me. I failed a lot. I continue to fail. Even with a book coming out, a fiction fellowship from Literary Arts, and an excellent agent (Adriann Ranta at Wolf), I still get rejected by literary journals 50 or 60 times a year.

This book was no different. After draft number eleven, I researched agents who represented modern memoirs, and chose fifteen to query. Then I wrote and revised a query letter until it was perfect – followed all the rules but still demonstrated my style. After sending it off, I received four requests for partials, and three ended up being interested. Two were very interested, and I chose between those two. But I chose poorly.

Another revision, 10 months, and 15 book rejections later (including rejections from all the big houses), I realized that I might not be with the right agent. She didn’t reply to me when I emailed questions. She was distant. I felt her drifting away as a high school girlfriend might drift away.

So I fired her and started over, and that was probably the low point in the process. If the whole book publishing experience is a hero’s journey, then that was the abyss. I was alone down there in the volcanic gasses, without an agent, holding the twelfth draft of a many-times rejected book.

But I’d kept in contact with the junior agent at the agency I’d not chosen the year before. Adriann had just joined Kirsten Wolf’s new agency and started recruiting her own clients. I liked her style, her attitude, and how well she communicated. So we went forward and signed an agreement.

Adriann got the manuscript to her editor friend Siri Comeau who read and and helped me with draft thirteen, the lucky draft. On the next submission round, we got two offers of publication, and we chose Soft Skull and Denise Oswald as the editor.

You teach high school full time. How do you juggle the demands of your writing and teaching life?
Not well. For a while, it was okay. I wrote one hour each morning, then left for school. Simple. But as I’m asked to write more and more (for magazines, etc.), and I also want to finish my novel and short story collection, I’m struggling with the time constraints. I’ve recently started writing at night as well, but I don’t want to lose all my family time. So eventually, and perhaps soon, I’m going to have to cut back and teach half-time. Write three of four hours a day.

Any tips for aspiring writers?
Enjoy failing. Make it funny. Tell stories of rejection. Become a survivor. As Laurence Gonzales writes, “Don’t whine, complain, or blame. Have an internal locus of control.”

This culture is not built on quality writing. Notice the bestsellers, authors who get million-dollar advances for first drafts. Or average movie writing. Television scripts. Mostly awful, embarrassing. But our culture champions quick mediocrity. And literary writing can’t be produced at the speed essential to make money. If it’s not fast, it’s not lucrative. So good writing is a subversive act, counter-culture, and perhaps insane.

Take too much time. Revise repeatedly. “Perfect” is a verb. An action.

Peter’s web site can be found at peterbrownhoffmeister.com