April 18th is the deadline to cast your vote for the Reader’s Choice Award. The winner of the Readers Choice Award will be announced at the Oregon Book Awards ceremony on April 25th.

Helen can hear the birds calling out to one another, and the lines of a song come to her like a gift: “Since you seem to be so sad, I will try to be your glad/ bluebird of happiness.” She should ask Abby to sing it for her; Abby knows all the old songs.

The pale light is like molten silver, and each water droplet clinging to a leaf holds the entire trembling world inside it. It seems that always there has been this moment, and her life moving toward it—a clean, bright morning, the people she loves nearby. Everything that happened before comes back to her now in such dim traces that she can hardly tell what was in sleep and what was in life; it is like a dream inside a dream of living.

She takes a deep breath. The world is beautiful, and she is so glad she has seen it. She stretches out her arms in the cool air. She hears footsteps, and she knows that her daughter and her husband are jogging up the path to meet her—and here they come, and here they are, and now they are beside her, holding her hands.

Christopher Freeze was born rather undramatically in Phoenix, Arizona—at the time a city in transition: a sprawling, major-league-sports-franchiseless nowhere in the middle of the Sonora desert that was fifty years and who knows how many millions of gallons of illegally diverted river water away from becoming the wealthy golf and retirement Mecca it is today.
A relatively healthy baby, Christopher endured the usual cavalcade of childhood maladies: chicken pox, mumps, whooping cough—usual with one significant exception: hospitalizations at the ages of nine and eleven for stomach ulcers, the product, it was professionally surmised, of pathological worry.

(Excerpts from the unpublished journals of Christopher Freeze)
Back in the studio this morning. I wanted to pick up where I had left off on Untitled, but I couldn’t. I couldn’t make myself care about it—not in the right way. All I could do was sit there and stare stupidly at those first 100 strokes and wonder what it was that had gotten me started, what it was that made me think I knew where this was going. It’s probably another terrible idea and I just don’t know it yet. I’ll try to get a little distance, to rejoin it, to fix it, but I won’t be able to. I’ll slap at it and slap at it and slap at it again—who knows how many times—before I give up and scrape it down, before I say to myself at the end what I am saying to myself now: that it’s another mistake, another waste of precious time.

from A Painter’s Life(Inkwater Press)
by K.B. Dixon

In my favorite portrait of myself I am wearing an opaque eyelet dress, layered, with the scallop edges of the hemline barely whispering across the carpeted studio floor. It could have been worn for a christening though its lavish detail would have stolen something from an event where the child ought to be the focus. The child, wearing a long flowing white dress that could be handed down to brother and sister for each successive important day, that’s what matters at a christening. The child is what people should gaze upon at such an event, not a mother or aunt or friend wearing a too-elegant eyelet dress.
It could be a wedding dress but of course, it wasn’t.
I find so few photographs of myself that I wish to share with others but in this one, I appear taller than my five feet, two inches as I’ve chosen a hat with ostrich plumes swept up in the back and high over my head. The plumes shade my eyes with dried berries that flow out onto the hat’s white brim in a cornucopia of fruit. My hair, the color of oiled leather, is coiled up beneath the brim. (My little brother, Roy, says I have hair the color of cow pies dotting the pasture on our grandparent’s farm, but that’s the nature of little brothers born in the new century, or at least was Roy’s creative nature before the accident.) The milliner did splendid work and the white of the felted hat brim brings the eye to the dress which is what I wanted. The beauty of the dress is the real subject of the photograph.

from A Flickering Light(WaterBrook Press)
by Jane Kirkpatrick 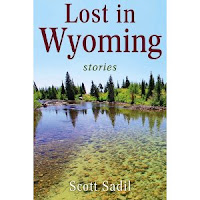 He knows he’s in trouble when she comes out from behind the Subaru, still in her sun dress, her bare legs tapering dramatically into a pair of heavy-soled leather brogues. The dress, an unripe apple green, seemed innocent enough as they drove across the state in the dense July heat, tracing the margins of a vast smear of smoky sky fed by wildfires in the distant mountains. The straps at her sharp collarbones left her toned arms free to steer, and only once, behind his sunglasses, had he suffered several miles of foolish thoughts, lost in study of the delicate veining along the inside of her far bicep. The hem, to be sure, had ridden, on occasion, high on her thighs as she stirred beneath the wheel, forcing him to avert his eyes. But at Elgin Fischer’s age, all dresses seem short, if only because so few women wear them anymore—although there also remains, for him, the simple consideration of their remarkable, panoramic access.

It’s the shoes, however, laced beneath Eudora Cromwell’s slender ankles and trim, athletic calves, that threaten to do Elgin in. His heart, he feels, possesses no means to resist such flagrant disregard for pretense or décor. He peers over the tops of his reading glasses, set in place so that he can rebuild Dori’s leader, a collection of wind knots and brittle bloodknots from whenever she last went fishing. He fumbles with the spools of tippet material he found stashed in her fanny pack, probably the same spools, he thinks, from the last time they fished together. Hell, this could be the same damn leader, he concludes, not quite certain how many years ago he invited her to meet him for that August evening on the Deschutes.

from Lost In Wyoming(Barclay Creek Press)
by Scott Sadil

I went to Pete, put a halter on him, and loaded him. Then I went to the tack room, took my bag of clothes and sleeping bag, and put them in the cab of the truck. After that I went into the rafters and got my last couple cans of food, then took two bales of Del’s hay and set them in the bed of the truck. I got back in and circled around and drove to the main gate. The old-man security guard came out and I rolled down the window.

“What are you doing?” he asked.

“Del’s selling Lean on Pete,” I said. “He told me to load him and park across the street. He’s in the café finishing up playing a card game.”

The security guard turned on his flashlight and looked in the back of the trailer and then shined the light on him.

I signed where he told me to, then he opened the gate, and I drove out. I had the truck in first. It was hard to get it in second but I did and drove down the road towards the freeway. I didn’t mean for all of it to happen like that, I really didn’t. But I could tell by the looks of the other men at the card game that Del was going to sell Lean on Pete to what the people at the track called the killers. I knew sooner or later he would be in a stock trailer full of other horses he didn’t know heading for Mexico.

from Lean On Pete(Harper Perennial)
by Willy Vlautin