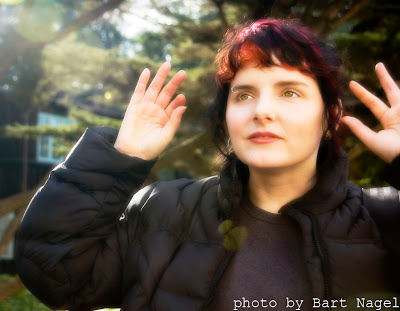 Tiffany Lee Brown lives in Portland and is the author of A Compendium of Miniatures. She edits Plazm magazine and is the director of New Oregon Arts & Letters. An installation based on her five-year interdisciplinary artwork, The Easter Island Project, will open at Reed College Cooley Gallery’s Caseworks series in January.

A Chronology of Water by Lidia Yuknavitch. Memoir is tough to pull off these days. Unless you cross the Atlantic in a recycled solar bathtub or become the first African-American president of the United States, we’ve all heard your story before-especially if your memoir talks about your life as an addict, abuse victim, Bohemian, or (heaven forfend) a writer. Yes, this is the stuff of life and it’s hecka dramatic, but that’s why so many people write books about it.

We have the simplistic Eat, Pray, Love sorts of things. We have the irritating Anne Lamott who nonetheless writes poignant, universal stories. We have macho-yet-pensive travel tomes like those of Paul Theroux. We have post-Pilgrim Annie Dillard, severe and a bit pompous about the whole business of writing and living. You’d really have to elevate the form, voice, and story to stand out in the era of memoir. You’d have to make us feel the power of life’s adventures and transformations anew, without losing your honesty and personality, without pumping yourself up or (far worse) mincing around in false modesty.

Lidia Yuknavitch has done it, brilliantly and passionately. She’s written the real memoir of a very real writer in the real world today, without sacrificing her voice or eccentricity. I’ve written more about the book itself in the recent issue of Plazm magazine, so I’ll stop here. The important thing is this: go get the damned book.

Leviathan by Scott Westerfeld. When I’m not reading genius local writers, I consume middle reader and young adult fantasy fiction, with the excuse that some decade in the far future I’ll actually write some myself. Somehow I skipped the popular Leviathan steampunk trilogy when it came out, not to mention Westerfeld’s imaginative Pretties series. Both were excellent accompaniments to the beautiful, long winter months I spent with my newborn baby last year. Disclosure: I used to house- and cat-sit for Scott. I’d drink Scotch and stare at his view of the World Trade Center. But that’s not why I had so much fun with these books.

NurtureShock: New Thinking About Children by Po Bronson and Ashley Merryman. Dumb title, good book. Po Bronson’s pretty fabulous at keeping readers entertained while discussing, like, Really Important Stuff and quoting research and, you know, whatever. Did you know telling your child she’s smart is a bad idea? That all those martial arts, ballet, and violin lessons have no effect whatsoever on his future academic achievement and discipline? That sometimes corporal punishment works out fine, according to the research? Yeah, me neither. It’s fun stuff for those of us who love pop neuroscience and psych research, who wonder endlessly why humans do what we do.

Runner-up: Nicholas Carr’s The Shallows: What the Internet is Doing to Our Brains. Carr’s another guy who can talk research and neuroscience with accessible, appealing prose.