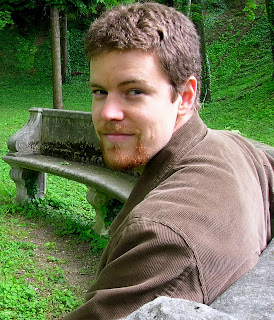 Mark Allen Cunningham is the winner an Oregon Literary Fellowship in fiction. Mark studied literature at Diablo Valley College, California and the University of London. He currently publishes book reviews and cultural commentary for The Oregonian. This year he will participate in the Oregon Humanities’ Conversation Project as both scholar and facilitator. His writing has appeared or will soon appear in Tin House, Glimmer Train, The Kenyon Review, Epoch, Boulevard, Inkwell, The New York Times, and elsewhere.

Describing the novelist’s endeavor, Mark says: “I’ve made peace with certain facts about the literary vocation, a primary one being that the novelist’s work – rarely streamlined, rarely efficient, necessarily isolating, and frequently painful – is accomplished most often despite the novelist’s life circumstances, and in the absence of the pragmatism, the knowing and surety, which normalcy insists must frame our days.”

In his judge’s citation, Peter Turchi praised Mark’s writing: “While the dramatic action follows a curious boy working in his father’s store, a powerful sense of personal myth and literary allusion promise a novel in conversation with Faulkner and Melville and possibly even Robert Louis Stevenson, and indicate a writer both original and well aware of the writers who have come before him. Cunningham’s writing, like the scope of his novel, is bold and ambitious.”

And here’s an excerpt from Mark’s novel:

The boy could locate his own Iowa pictured in yellow or pink. Always the wobbling hems of the Missouri and Mississippi sewed it in place. His eyes explored the centimeter-thin area below Des Moines. That smallness of scale became vastness when he walked outdoors – hard to grasp a nation’s immensities – and was there anyplace in the world as big as America? As ever he watched the telegraph wires bellying pole to pole. The wires followed King Street along the square and continued west to the track by the depot. From there they trued themselves to the railroad. And to think they linked the principalities of the globe.

We asked Mark a few questions about his writing:

How does the work you do to earn money influence your writing process?
As a Stay-at-Home Dad, all my work (earning or not) is squeezed into the interregnums of naps, preschool, and late-night hours. I do freelance work very occasionally, all nonfiction, which I think has a salutary effect on my fiction-writing process, helping me clarify my thoughts on my reading or on questions or concerns in the larger culture—helping me be a better observer. As far as observation goes, though, being a parent is about the best training one can get. Small children are a boon to the imagination, if not to the writer’s office hours. Only world travel compares.

What text has been recently inspiring?
Two books by John Berger: A Painter of Our Time (his debut, published in 1958), and Here Is Where We Meet (2005). Berger is as socially, philosophically, and poetically vital as he is prolific. I recently heard him described as our contemporary Ruskin, and that (with fiction-writing thrown in) sounds about right to me. His unconventionality and pure imaginative energy are exhilarating.

Do you have any advice for future fellowship applicants and aspiring writers?
Literary fellowships and awards are out of your hands. Like most of the literary life, submitting applications is largely a question of endurance, of applying and reapplying with near-mechanical doggedness, and of aspiring toward a superhuman detachment from results. Meanwhile, the most—the best—the writer can do is remain focused, at all times, on the peculiar mandates of the writing process, lead a deep and tireless reading life, and learn as much as possible from these writing and reading processes every day.