On Saturday April 21, writers convened at Literary Arts to take part in a mini-Sledgehammer writing contest. 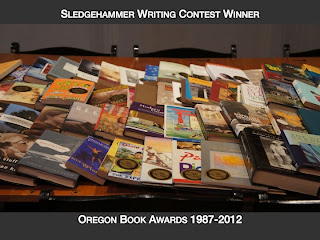 All the prompts were titles of this year’s finalists:

Congratulations to Jennifer Gritt, first-time Sledgehammer participant, who won a complete set of twenty-five years’ worth of Oregon Book Award winners. Many thanks to Sledgehammer for facilitating and judging this contest! Here is Jennifer’s winning piece:

Calvin Coconut avoided the company of people. His whole goal in life was to be left alone, to live life like a hermit, embrace the silence of the world. Growing up in the small village of Wholesome, Calvin had learned from a young age to avoid the conversations of others. He stood quietly on the edges, offering nothing. The villagers took pity on him for they thought he was slow of mind. They treated him like an old dog entering his last weeks of life. He moved in and around the people of the village like a mist. Sometimes, upon suddenly noticing him standing there, a villager would startle as if seeing an unexpected ghost. Then she would smile sympathetically and sometimes pat him on the head. It was only the women who seemed to notice him and he didn’t mind the touch. For he knew they just did that as a way to acknowledge him and quickly move on.

When Calvin got older and older, his parents seemed to age twice as fast. His mother and father treated him as the rest of the village treated him—sometimes even forgetting he was there altogether. On his nineteenth birthday, they died together in their sleep. Calvin felt a wave of sadness when he discovered their bodies—slumbering now for eternity. He would miss them.

When Max the undertaker arrived to take care of the funeral arrangements, Calvin refused to leave his side. Max carefully prepared the bodies for the funeral in silence while Calvin stood in the corner watching his every move. They said nothing to each other—not then, not after. And it was better that way.

Soon after his parents’ funeral, Calvin moved a few miles outside of the village. The was an old shack just on the edge of a forest under a giant tree. There Calvin made his home. Every now and then, a woman in the village would remember Calvin and ask after him. “I think he lives in the hut beneath the pine,” someone would respond, “you know, that old hunting shack a few miles south of the village.”

For years, Calvin was neither seen or heard from. Only Max the undertaker seemed to remember him at all. One day, Max ventured out to Calvin’s hut. He was retiring, you see, and was looking to pass off his business to a worthy man. Being an undertaker was more than just putting make-up on dead people. There was a ceremony to it, an affection, a love. Only the true of heart could perform this task.

Calvin was working in his garden when Max arrived. The two men did not say a word to each other. Silently, Calvin went in to grab his coat and his hat and locked the door behind him. They walked back to the village in silence.

When they arrived, the butcher’s wife ran up to Max. She was crying and waling. For her husband had suddenly died while he was working in his shop. A heart attack. The village was devastated. The butcher and his family were well-liked. When the villagers saw that Max had brought Calvin back to the village, they started to wonder why the old man had done this. When they realized that Max was going to have Calvin prepare the butcher for burial, they were concerned and somewhat outraged.

But Calvin soon put the villagers’ fears to rest. For when the butcher was placed in his coffin, he was the image of beauty and peace. The villagers were amazed that Calvin could prepare the dead for eternity with as much grace as he did. And they were grateful that he was once again part of the village.