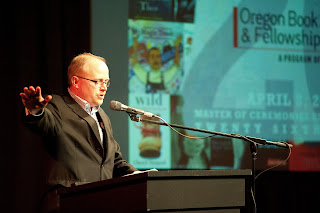 O muse! Let’s not fight. Pooky?
It’s so quiet between us, I feel you’re
up north somewhere, where
Glaciers sit silent in The Evening Hour
surrounded by The Listeners,
like lemon freckles in blue moonlight
clinging to Bin Laden’s Bald Spot.

I’m too close to the big quiet
someone should scream like a stepped on Smurf.
The voice Shards are needed to cut
the dark, like yelling “Carter Sickels.”

I call to you in a hundred voices over the endless Fjords.
Vol1 sounds like Brian Doyle calling to Ismet Prcic. “ Yo, Ismet!”
These Off-Key voices are such Fragile Acts
when they try to yell “Gertrude, Poems and Other Objects.”
This is a hopeless thing to yell across a Fjord.
Why would anyone do this?
Yelling across a Fjord is just asking
for Fall Ill Medicine.

Vol2, your poetry gets lost across the fjord of listening
and names emerge from simple lines:
You shout, “Lean over the bean!” and I hear Jean Esteve.
“Lend me your hummus!” warps to Leni Zumas.
“Surrender the hammer!” turns to Tori Hanner.
“Oh, if my feet were numb!” morphs to Allan Peterson.
“I require a sack of home burgers!” ends up Zachary Schomburg.
“Bring me an arachnid, forthwith!” becomes Alexis Smith.
“You must carry the giant foam finger!” winds into Carrie Seitzinger.
Then, I walk away dejected, a lonely man, listlessly
listening to the listings in the phone book of failure.

Muse, when you will you stop mumbling your inspiration?
I don’t know what you’re asking, it could be
“Why are you such a Noble Failure in
Immaterial Matters? Do I need to send you
to Costa Rehab in Antartikos. Why do you
insist on these Lear’s Follies of yours?”

And all I can hear across our relationship’s fjord is
“If you Susan Mach my Steve Patterson again,
I’ll be forced to drink a Stolowitz with Andrea,
eat a Rich Rubin and then I’ll probably just
C.S. Whitcomb my hair in a state of general malaise
for the remainder of the day.

Our communication is hopelessly flawed,
so my mind wanders. I think of moon rocks and banjos
and The Political Thought of Frederick Douglas:
In Pursuit of American Liberty. And then you say:
“Are you listening to me?” And I’m on the moon
playing golf with Frederick Douglas.
So don’t get mad at me if I’m not always listening.
Please don’t come at me overbearing,
Could your tone be somewhere between
Dirty Little Secrets: Breaking the Silence
On Teenage Girls and Promiscuity,
and bossy, like you’re Almost President, like
you’re The Bible, the School and the Constitution.
I just don’t want The Wrecking Crew of your voice
coming at me like an 80’s after school special:
all mayhem, mullet and message.

It’s times like these, when I want to tattoo you in your sleep.
I want to tattoo names on the beautiful blank slate of your arms
like the finalists for the Frances Fuller Victor Award
for General Nonfiction, Nicholas Buccola
Kerry Cohen, Scott Farris, Steven Green
and Kent Hartman, just for example.

I do this in hope I might create a Crazy Enough situation
where you run into the finalists for the Sarah Winnemucca Award
for Creative Nonfiction while seeing friends,
like Seeing Ezra and Annie and Helen,
a situation that could be really Wild
or at least Part Wild if Storm Large, Cheryl Strayed
Ceiridwen Terrill or Aria Minu-Sepehr
see your tattoos and say “Why do you have general nonfiction
finalists on your arms? Aren’t creative nonfiction
finalists good enough for you? Are you all
‘We Heard the Heavens Then’ when you read
nonfiction that is not considered creative?
What have you got against creativity?”
Then someone will yell “Nonfiction fight!”
And coffee mugs, laptops and blood will fill the Starbucks.

But revenge becomes complicated too soon with you,
when I’m on my Calvin Coconut: Man Trip,
I want to keep it simple,
just Drawing from Memory,
like a beautiful Blue Thread,
like Once Upon A Toad
like a soft Cat’s Foot
like First Comes Love.

Muse, I want to go back to when we called each other
pet names no one uses.
Instead of Pooky and Stud Muffin
I’ll call you my little Heather Vogel Frederick.
and you can call me your little Brian Doyle schmoyle
and I’ll say you’re the Ruth Tenzer Feldman of my eye
and you’ll say, no you’re the Graham Salisbury of my gal bladder
and I’ll say, say are you Allen Say and
you’ll say you said ‘say’ three times in a row Deborah Hopkinson
and I’ll say yes I did my little Katie Kacvisnksy
and you’ll say oh Tyree Guyton shmytan
And I’ll say oh J.H Shapiro shmiro.

Oh how soon, till we can puppy-love-out again, Muse?
When will our love come back, a great pile of Magic Trash
A Story of Tyree Guyton and His Art and love.
O, my Muse.