Emily Chenoweth, Oregon Book Award author and instructor of Writing a Novel in Eight Weeks, is on assignment this week at AWP in Minneapolis. Here’s what she’s been up to:

It’s Friday morning in Minneapolis. What the weather report calls “snow showers” are actually wet, heavy snowflakes the size of fifty-cent pieces: if you walk into a store with a few of them on your hat, they’ll just linger there, too big too melt. Later, in line, you’ll pluck them off yourself and flick them onto the floor, where they land with a faint but audible splat.

You’ll buy your breakfast at the store, which is a Walgreens; breakfast is a bag of Lays potato chips. This is because you went to lectures all day yesterday, which tricked you into thinking you were somehow still in college, when nutrition meant nothing to you because you were 19 and immortal. 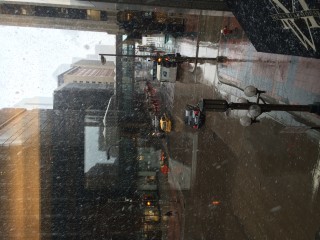 All you really wanted anyway is the large Starbucks, black, and you have that. It’s better than a mitten for the walk back to the hotel.

The you, of course is me. I’m attending my first AWP Conference, which is something that apparently everyone who’s anyone in the literary world does yearly, although I must admit I barely knew what it was before I got here.

It’s a truly mindboggling event: there are somewhere between 12 and 14,000 attendees who gather for hundreds of lectures and panels and readings, not to mention dozens upon dozens of parties, both onsite and off. There’s an enormous room in which publishers, college writing programs, and literary magazines hawk their products in well-appointed booths, and people scurrying around with their AWP souvenir tote bags stuffed with books and swag.

Yesterday I sat in on panels about plot, character, and craft (“Character is Action,” “A Thread Through the Labyrinth: Learning and Teaching Plot,” and “A Lifetime Experience in One Hour: The Art of the Craft Talk”), where I took studious but likely illegible notes and felt the giddy thrill of being in rooms of people who cared about the written word as much as I did. (Pictured at right is Cheryl Strayed at a VIDA  event on Thursday).

As the brilliant Karen Russell noted in her mind-bending keynote speech last night—topics included play as therapy for stroke victims, the poetry of Dean Young, and why dolphins are like George Clooney (“they’re both charismatic megafauna”)—AWP is a gathering of an enormous tribe. Whoever we are, wherever we come from, we belong together.

So I’m about to put on my boots and scarf and tromp out into the snow to find my people. It’ll be easy, because right now they’re everywhere.