Stacey D’Erasmo is the author of four novels and one book of nonfiction, including The Sky Below and The Art of Intimacy: The Space Between. Her articles and podcasts have been published in The New York Times Book Review, New York Times Magazine, Ploughshares, Interview, The New Yorker, and the Los Angeles Times. She is currently an associate professor of writing at Columbia University.

Here are her comments on the 2015 Oregon Book Awards finalists for the Ken Kesey Award for Fiction: 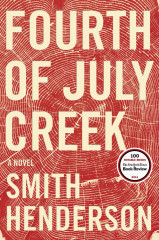 A corker of a novel—could it really be Henderson’s first?—that sweeps the reader through a vast, modern terrain of the struggling, the damaged, and the ferociously determined by means of urgently gorgeous, often astonishing sentences. A damaged boy and the social worker who tries to help him are at the heart of what we come to see as a collective body of Americans on, or over, the edge materially, emotionally, spiritually, or all of the above. A fearless novel about the way many of us live, or desperately try to live, now. 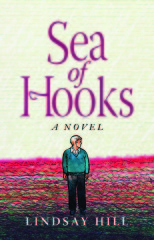 Sea of Hooks by Lindsay Hill

A glittering, prismatic, astonishingly original collage of fragments that make up the life and soul of Christopher Westall, a character with a mind as big as the world. Hill’s range, sentence to sentence, scene to scene, juxtaposition to juxtaposition, is nothing short of virtuoso, as is his mastery in articulating and exploring emotions of nearly unbearable ambiguity, contradiction, grief, and love, along with spiritual seeking. Christopher goes from San Francisco to Bhutan, from deep within himself to the furthest reaches of his relationships with others, tracing an unconventional course that is as heartbreaking as it is delightful. An adventure of body, mind, and soul unlike any other. 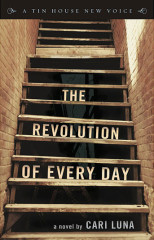 The Revolution of Every Day by Cari Luna

The vulnerability and power of a home built with salvaged wood, dumpster finds, sweat, idealism, magic, and desire pulses through this tender and brilliant debut novel about the intertwined lives of five squatters in love and trouble on New York’s Lower East Side in the ‘90s. Luna’s prose is by turns gritty, lyrical, and workaday, as suits her material, but the novel also possesses that ineffable quality of radical empathy for humanity in all its flawed, striving glory. I dare you not to fall in love with every character here. 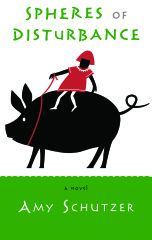 Spheres of Disturbance by Amy Schutzer

A novel that begins in the point of view of a pregnant Vienamese pot-bellied pig and conveys that perspective not only beautifully but also entirely plausibly does raise the question, Where can the novelist go from here? Everywhere, as it turns out, in the scope of one day in 1985 as a woman lays dying. Alternating among nine points of view, including the pig’s, Schutzer illuminates the splendor of the everyday as it flashes among these friends and lovers, mothers and daughters, humans and animals, in prose that feels carefully stitched by hand over many years. A nine-pointed gem of great intimacy, filled with the joy of ordinary life. 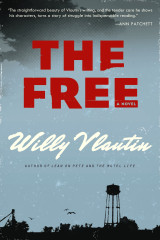 The Free by Willy Vlautin

Style and politics are unified in Vlautin’s prose of such elegant simplicity that it has the feeling of wood planed to a silken finish. The center of the novel is Leroy Kervin, an Iraq war veteran with a traumatic brain injury, marooned in a group home and in his own mind. A nurse, a night manager, other residents of the group home: these often overlooked people form a constellation of grace and bravery as they cope with various accidents of fate and class. Would it surprise you to hear that The Free is also a page-turner? And yet it is, because Vlautin’s characters are so richly alive, their dilemmas both so everyday and requiring such extraordinary courage. Vlautin sees, and writes, with a clarity that feels revelatory.