Chinelo Okparanta is the author of Under the Udala Trees (2015) and Happiness, Like Water (2013). A Colgate University Olive B. O’Connor Fellow in Fiction, Okparanta was one of Granta’s six New Voices for 2012. She was a finalist for the 2014 Rolex Mentor and Protégé Arts Initiative and was short-listed for the 2013 Caine Prize in African Writing. She is a 2014 O. Henry Award winner as well as a 2014 Lambda Literary Award winner for Lesbian Fiction. Her stories have appeared in The New Yorker, Granta, Tin House, The Kenyon Review, among others.

Here are her comments on the 2016 Oregon Book Awards finalists for the Ken Kesey Award for Fiction: 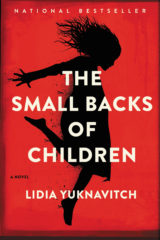 The Small Backs of Children by Lidia Yuknavitch

Set in Eastern Europe, The Small Backs of Children begins when a girl loses her family to a bomb blast. What ensues is an interesting cast of artist characters—the photographer, the playwright, the filmmaker, etc.—who are each fighting their own personal battles, but who also embark on a mission to save the girl. Richly poetic and stylistically innovative, this harrowing narrative is a meditation on love as much as it is a meditation on war. But it is also a meditation on ethics of art and what it means to be an artist. It was an utterly unique and stunning read. 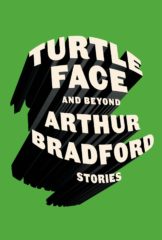 Turtleface and Beyond by Arthur Bradford

Clean, crisp prose. Quirky, unexpected twists and turns in plot. Darkly humorous. Turtleface and Beyond chronicles the lives of hippies and misfits: A turtle causes a life-changing accident. A porcupine-related prank between friends leads to a stroke, and a healing, and a closer friendship, and then, a death. A set of prosthetics are stolen from a goofy, eccentric couple. Etc. Bradford’s gritty and truthful and unputdownable writing calls to mind two great writers: Ray Carver and Flannery O’Connor.

The Tunnel by Gail Chehab

An engrossing tale about a Palestinian couple who find themselves having to navigate travel to Gaza in order to get treatment for their sick daughter, The Tunnel was a surprising find: Unique in its theme and setting from any of the other books in the batch, “[i]t had come out of nowhere and blown [me] away” (to quote from the book itself). A daring political work of art, not least of all bold in its treatment of the Palestinian-Isreali conflict, ultimately, it is a novel that reminds us just how strong and enduring and life-sustaining the bonds of family can be. 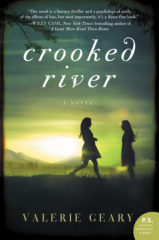 Crooked River is the thrilling story of two sisters, Sam and Ollie, who, having lost their mother, now find their father accused of a murder. As Sam fights hard to prove that her father is innocent, Ollie remains silent, her communication essentially limited to spirit people, called the Shimmering. Bear, the girls’ father, reveals his own sketchy secrets from the past. Solid writing, a warm set of characters, a wonderfully paced plot, this novel was was utterly absorbing and difficult to put down. 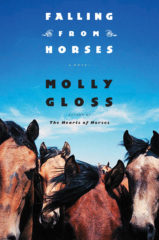 Falling from Horses by Molly Gloss

Set in the era of the Great Depression, Falling from Horses is a beautiful take on a friendship between two young people, Bud and Lily, as they pursue their dreams. But it is also an intricate history of the struggles of the American West, and of Hollywood. Told in spare, gorgeous prose, Falling from Horses is a touching and thought-provoking read.