Gabrielle Bell is the author of five books, including The Voyeurs and Truth is Fragmentary. Her work has appeared in The Guardian, Vice magazine, McSweeney’s, The Believer, BookForum, Flare and The Big Issue, and has been selected six times for the Best American Comics. The title story of her 2009 collection, Cecil and Jordan in New York, was adapted for the screen by Bell and Michel Gondry for the triptych film Tokyo!. She lives in Beacon, New York.

Here are her comments on the 2016 Oregon Book Awards finalists for the Pacific Northwest College of Art Graphic Literature Award: 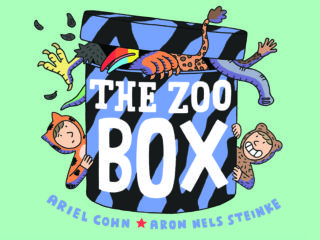 The Zoo Box by Ariel Cohn and Aron Nels Steinke

This is a delightful, perfect children’s book. Two children misbehave and nearly unleash all kinds of unspeakable havoc on the world and themselves, but just barely manage to avert it. Not only that (spoiler alert:) they totally get away with it, which means they get to go to the zoo the next day and are never punished. Is this even allowed in children’s books? The artwork is masterful in its simplicity. The story is fun and playful, and likely to be a great delight to comics fans of a certain age. 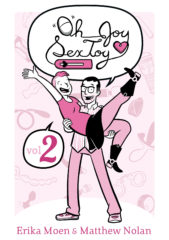 Personally, I had a hard time getting through this book. It is extremely graphic and clinical in its imagery. In fact, this book nearly drove me to alcoholism, from all the times I had to stop reading and take a strong drink. But great art should be challenging. It isn’t about the subject matter, after all, but how the subject matter is handled. Firstly, Erica Moen has mastered the art of cartooning. To make something look simple and easy in comics is a long, laborious process, which takes years to cultivate, and she has has done this, while developing her own clear voice. Aside from that, her unapologetic, celebratory, inclusive, non-binary, nonjudgmental approach to her subject matter is admirable. She never says, “sex is for everybody!” or, “I don’t have to apologize or explain my love for sex” she shows it. She shows it until you have to take another shot of whiskey and close the book for awhile. 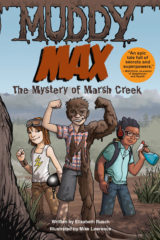 This is a weird, silly story about a boy who is not allowed to touch mud because, although he doesn’t know this, it will turn him into a superhero. And yet, he lives in the muddiest town in the world. Of course he eventually discovers the secret his parents are trying to hide from him, and of course he temporarily becomes drunk on the power of a young nerd having the strength to lift a bus. The true hero in this book, really, is the nerdy sidekick who keeps thinking up genius solutions and inventions to save his friend from being ultimately consumed by the mud, which was the fate of (spoiler alert) his older brother. 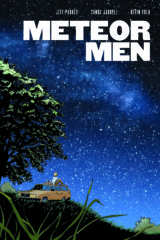 A story about a sort of alien invasion. This book does a good job of attempting to imagine extraterrestrial life and its motives as very different from humanity’s, and how it understands itself. There is a different way of communicating, a sort of wordless mental projection that is very conducive to comic storytelling, and an amorality that the earthlings can’t figure out how to address. I appreciated the ending, which didn’t resolve itself with winners and losers, but with an accepting inevitability, which was, in its way, transcendent. 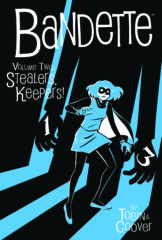 Bandette is a young Parisian thief, whose mastery of marshal arts, gymnastics, ninja arts, and banter put her in the realm of superheriosm. A brigade of ballerinas, street urchins, fellow bandits, and a hopelessly doting delivery boy stand by to aid her in her thievery and occasional crime-fighting. You could argue, rightly, that Bandette is not exactly feminist material, that she is yet another male fantasy in the guise of the “strong female character,” and is completely unrelatable to any real female human being. But she is adorable as a kitten, and we all love kittens.