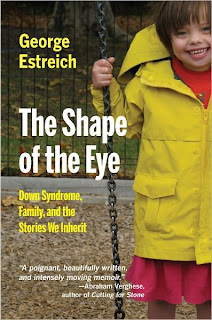 Madeleine Blais was the judge for Creative Nonfiction this year.

Here are her comments on the 2012 winner of the Sarah Winnemucca Award for Creative Nonfiction, The Shape of the Eye by George Estreich:

George Estreich moved to Corvallis in 1998 with high hopes: his wife Theresa had just been offered a tenure-track job. “Mobile, rootless, hyper-educated, underpaid—-we might at last, settle down.” A poet and a stay at home dad, he envisioned an easy time, taking care of his daughter Ellie and enjoying life in a new venue, but shortly afterwards, his second daughter Laura was born with an extra chromosome.
The universe shifted, as did the author’s mood, from one of optimism to grief, from clear-headedness to confusion.

Estreich documents the history of the syndrome, both culturally and medically. Along the way, he discovers that the diagnosis brings with it a thicket of contradictions. Early on, Estreich takes issue with a “parable of acceptance known universally among parents of children with Down syndrome,” in which a noted expert writes that having a child with Down syndrome is liking booking a trip to Italy and landing in Holland instead.”

‘It’s slower-paced than Italy,” he writes, summarizing the story, “ less flashy than Italy. But after you’ve been there for a while and you catch your breath, you look around .. . And you begin to notice that Holland has windmills . . .and Holland has tulips. Holland even has Rembrandts.”

The fable is way too facile for the author who had a different image in mind: “It is like waking up to the same world you went to sleep in, except that overnight a team of industrious demons has jigsawed your picture of the world into a ten-thousand-piece puzzle. You know that you will be piecing things together for a long time, and that when you are done the seams will be evident everywhere.”

The Shape of the Eye is honest: after a grueling hospitalization of Laura as a baby, the author admits it occurs to him later that “I did not yet love her.”

It is practical: the solution for a child who won’t eat is calorie-rich ranch dressing. It has humor: after a successful spoon-fed meal, Estreich declares himself the “mayor of Hidden Valley.”

The writing throughout is both exuberant and defiant:

“There is an irritable exhaustion specific to primary caregiver, in the late afternoon, when you are sleep-deprived, caffeine has lost its power to revive you . . . You have already played Chutes and Ladders and Hi-Ho! Cherry-O and Masterpiece, and each time it has taken more time to find and set up the game than it has to actually play it, and somewhere beneath the increasingly snappish exchanges between you and your children, your brain is sinking to the benthic depths of four o’clock, where the last few caffeine molecules, like phosphorescent sea-creatures, are slowly winking out.”

At every turn he finds metaphor where others might see only heartbreak or uncertainty. “To write a book about a child with Down syndrome, as that child grows, is to understand that life is water. It runs, slips, evaporates, changes course, and what seems an eternal truth —- a child on a ventilator, a child who won’t eat, a child who hasn’t spoken—-evaporates, leaving a changing present.”

Estreich tries to fathom how Laura’s story fits into the larger family story, including his Japanese mother’s accounts of displacement during World War Two. He transcends his particular situation to find story, to find meaning and wisdom. Memoir, a genre sometimes maligned as self-indulgent and narcissistic, finds in Estreich a practitioner who brings deserved dignity to the form.

George Estreich, author of The Shape Of The Eye

2 thoughts on “The Shape of the Eye: Down Syndrome, Family, and the Stories We Inherit”