Literary Arts is pleased to announce the recipients of the 2020 Oregon Literary Fellowships.

Generous gifts from our community have increased the value of the Brian Booth Writers’ Fund Endowment which, in turn, has allowed us to further support exceptional Oregon writers.

For the first time this year, Literary Arts awarded two Oregon Literary Career Fellowships of $10,000 each, and thirteen fellowships of $3,500, for a total of $65,500.

Since 1987, Literary Arts has honored over 650 Oregon writers and publishers, and distributed more than $930,000 in fellowships and award monies through the Oregon Book Awards & Fellowships program.

For the first time, Literary Arts has awarded two Oregon Literary Career Fellowships of $10,000 each.

Beth Alvarado is the author of Anxious Attachments, long-listed for the PEN/Diamonstein-Spielvogel Award for the Art of the Essay ; Anthropologies, and Not a Matter of Love.  Her next book, Jillian in the Borderlands, is forthcoming in 2020. Having migrated north from Tucson, Arizona, she now lives in Bend,  where she is core faculty at OSU-Cascades Low Residency MFA Program.

Dao Strom is the author of a bilingual poetry-art book, You Will Always Be Someone From Somewhere Else, an experimental memoir, We Were Meant To Be a Gentle People; a song cycle, East/West; and two books of fiction, Grass Roof, Tin Roof and The Gentle Order of Girls and Boys. She has received awards from the Creative Capital Foundation, RACC, the NEA, and others. She was born in Vietnam, grew up in the Sierra Nevada foothills of California, and is now based in Portland.

Cynthia L. Brown was born in Richland, Washington, a support community for Hanford Nuclear Reservation, but she grew up in Texas. Brown’s communications career has spanned various industries, including film, television, art, and aviation. She holds master’s degrees in both management and sociocultural anthropology. She is working on her first novel, My Mother’s Trunk.

Marjorie Celona is the author of two novels: Y, published in 2012, and How a Woman Becomes a Lake, forthcoming in 2020. Y was published in eight countries, won France’s Grand Prix Littéraire de l’Héroïne for Best Foreign Novel, and was longlisted for Canada’s Giller Prize. Born and raised on Vancouver Island, they teach in the MFA program at the University of Oregon.

Taylor Koekkoek received his MFA from Johns Hopkins University. His work has been supported by the Bread Loaf Writer’s Conference and has appeared in Paris Review, Glimmer Train, Ploughshares, The Iowa Review, and elsewhere.  His short story collection, Thrillville, USA, is forthcoming from Simon and Schuster, as well as an untitled novel to follow.

Gabriel Urza is the author of the novella The White Death, and the novel All That Followed.  His family is from the Basque region of Spain, where he lived for several years. He is a grant recipient from the Kellogg Institute for International Studies, and his short fiction and essays have been published in Riverteeth, Hobart, Erlea, The Kenyon Review, West Branch, Slate and other publications. He spent several years as a public defender in Reno, Nevada, and is currently an assistant professor at Portland State University.

Olufunke Grace Bankole is a first-generation American of Nigerian parentage. After graduating from Harvard Law School, and completing a Soros Justice Advocacy Fellowship, she left law to write. Her works have appeared in Glimmer Train, Michigan Quarterly Review, New Letters, AGNI, and The Antioch Review, among others. She won the Glimmer Train Short-Story Award for New Writers, and the Bread Loaf-Rona Jaffe Scholarship in Fiction at the Bread Loaf Writers’ Conference. She was also awarded a Ludwig Vogelstein Foundation grant, and a residency-fellowship from the Anderson Center.

Garet Lahvis is a neuroscientist and worked for 30 years in the academic field and published over 40 scientific papers. His essay “NQR” was awarded the Curt Johnson Prose Award from december magazine.

Jamie Cooper is a 2004 graduate of the Iowa Writers Workshop. His work has appeared in TYPO, The Colorado Review, Parthenon West, and elsewhere. He teaches English and writes about the NBA for UPROXX Sports.

Alicia Jo Rabins  first collection of poetry, Divinity School, won the 2015 APR/Honickman First Book Prize and was a finalist for the Oregon Book Award. Her second collection, Fruit Geode, was published in October 2018 by Augury Books/Brooklyn Arts Press. She is a composer, performer and Torah teacher.

Eliza Rotterman grew up in Cincinnati, Ohio. Her poetry has appeared in Volta, Quarterly West, Colorado Review, and The Los Angeles Review, and she was awarded fellowships from the Vermont Studio Center. Her chapbook, The Dirt Eaters, was a 2019 finalist for the Oregon Book Award in poetry.

Kelly Garrett’s debut YA novel, The Last To Die, was a 2018 Oregon Book Award finalist and was reissued by Sourcebooks Fire in November 2019. Her first novel for adults will be published in April 2021 by Kensington Books. After growing up on the Oregon Coast, Kelly graduated from Pacific University and now calls Portland home, where she organizes multiple literary-related lecture series.

Rachael Carnes had more than 50 productions and publications in 2019. She’s recently developed work at the Inge Theatre Festival, the Kennedy Center, the Midwestern Dramatists Center, Mid-American Theater, A.T.H.E and the Sewanee Writers’ Conferences, the Ivoryton Playhouse, the Parson’s Nose Theatre, and the Samuel French Off-Off Broadway Festival. Rachael is the founder of CodeRedPlaywrights, a consortium of writers across the country responding to gun violence.

Established in 2016, Fonograf Editions is a vinyl record-only literary press, one of the only entities of its kind in the U.S. Each release is available in both an analog and digital format.

Fellowships to writers of nonfiction, fiction, and poetry were judged by a panel consisting of Patricia Park, Assistant Professor of Creative Writing at American University, Fulbright scholar in Creative Arts,  and author of the novel, RE JANE; Aatif Rashid, essayist and author of the novel Portrait of Sebastian Khan; and Kerri Webster, Whiting Award recipient and author of two poetry collections, including Grand & Arsenal. The judge for young readers literature was Kevin Emerson, author of 16 middle grade and YA novels, including Last Day on Mars, and the judge for drama was Stephanie Bubnis, Interim Managing Director of the Fordham Theatre Program. Kristina Marie Darling, Editor-in-Chief of Tupelo Press and Tupelo Quarterly, was the judge in publishing. 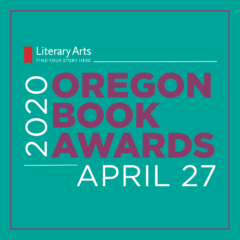 2020 Oregon Book Awards finalists will be announced on January 27.

We hope you will join us in honoring the finalists and fellowship recipients at the Oregon Book Awards Ceremony on Monday, April 27 at Portland Center Stage at the Armory.
Tickets start at $12.